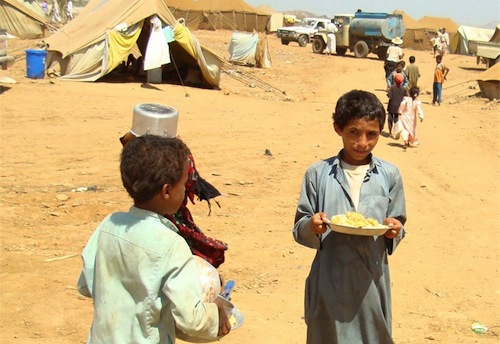 The United Nations appealed for $702 million to help more than 7 million Yemenis gain access to food, clean water, healthcare and other vital services, as two years of unrest and instability have led to a “near collapse” of basic services in the country.

According to the UN Office for the Coordination of Humanitarian Affairs (OCHA), the 2013 Yemen Humanitarian Response Plan urgently requires $702 million in order to provide emergency and early recovery assistance to 7.7 million of the country’s most needy.

“Conflict and instability elsewhere in the region and the ongoing political transition in Yemen have overshadowed the humanitarian crisis,” said the UN Resident and Humanitarian Coordinator, Ould Cheikh Ahmed, adding that there can be no long-term stability without addressing the humanitarian needs of the Yemeni people.

Yemen has been undergoing a democratic transition led by President Abdrabuh Mansour Hadi, who came to power in a February 2012 election. A major milestone was achieved in March of this year with the opening of the national dialogue conference that will feed into a constitution-making process and pave the way for general elections in 2014.

However, more than 13 million people – over half the population – are still in need of some form of humanitarian assistance. Food insecurity and malnutrition persist in the country, as well as outbreaks of fatal diseases including measles. Maternal mortality also remains high at 365 for every 100,000 live births.

The appeal has been revised from January, slightly decreasing from $716 million to $702 million as a result of “improved prioritization and focus for the remaining part of 2013,” OCHA said. Within the revised plan, humanitarian partners have also identified the most critical activities that will help people in greatest and most urgent need.

The Plan is currently only 38 per cent funded, and this shortfall has already led to a reduction in the provision of life-saving assistance.

“The almost complete lack of support for early recovery, livelihoods and capacity-building activities is limiting the ability of humanitarian partners to build the resilience of Yemeni communities,” OCHA said in a news release.

“I urge international and regional donors to provide funding for these critical activities that will have immediate impact, saving the lives and livelihoods of the most vulnerable Yemenis,” Mr. Cheikh Ahmed said.