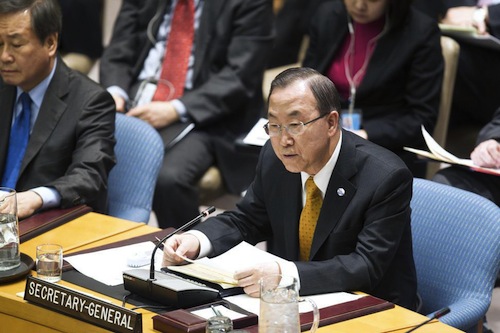 The Security Council yesterday extended the mandate of the United Nations mission in Afghanistan for another year, after Secretary-General Ban Ki-moon and other speakers urged continued UN support to the Government as it assumes full responsibility in most areas by 2014.

In a unanimously adopted resolution extending the UN Assistance Mission in Afghanistan (UNAMA) until 19 March 2014, the Council called on the world body, with the support of the international community, to back the Government’s so-called National Priority Programmes as it goes through the process of taking full control of security, governance and development.

The withdrawal of the bulk of United States and North Atlantic Treaty Organization (NATO) troops from Afghanistan is set to be completed by the end of 2014, while a transition of responsibility for security in the country from the NATO-led International Security Assistance Force (ISAF) to Afghan forces is already underway.

In its resolution, the Council said it “stresses the critical importance of a continued presence of UNAMA and other United Nations agencies, funds and programmes in the provinces, consistent with the transition process, in support of and in cooperation with the Afghan Government.”

Opening yesterday’s meeting, Mr. Ban said the UN must continue strong support to the Afghan Government up to and beyond the 2014 deadline for the Government’s assumption of responsibility.

“Let us work as hard as possible to ensure that this transition leads to the stable, prosperous and safe future that the country’s people deserve,” he told the 15-member body.

“We should continue providing good offices, including support for elections. We should maintain our work for reconciliation and regional cooperation. We must stand firm for human rights. And we must advance development,” he said.

He added that humanitarian action was also crucial to the UN’s future role, considering both Afghanistan’s “chronic vulnerability” and the impact of the transition as the numbers of international security personnel and others decrease dramatically.

Updating the Council on the situation in the country, the Secretary-General said that Afghanistan’s political climate is dominated by the 2014 elections. Broad participation and a credible process are essential to reaching the goal of a widely accepted leadership transition.

He also expressed his concern about the 20 per cent increase in civilian casualties among women and girls in 2012, as tallied in a UN report last month. He noted two statements from the Taliban perhaps indicating a willingness to engage and encouraged a meaningful dialogue to reduce the intolerable, continuing death toll.

Speaking to reporters, the Secretary-General’s Special Representative and head of UNAMA, Jan Kubiš, affirmed that the transition to full Afghan responsibility was progressing. “Almost everything is in motion and changing,” he said.

In that atmosphere, he said he was looking very closely, in today’s mandate extension, for “any confirmation of the key tasks of the UN and UNAMA” in the country. “There are a lot of questions and uncertainties practically concerning all areas of life and work in Afghanistan.”

“I hope to see some signals and messages in the resolution of the Security Council [concerning] what could be the role of the United Nations in the post-2014 period,” he said. “We need to prepare ourselves.”

He said he recognized that UN’s mandate is not “a transition mandate,” which would only be discussed and delivered next year. However, general planning, budgeting for the next biennium and agreements between the Government and the UN system need to be put in place.

Affirming also that upcoming elections were indeed the dominant topic around the country, he said that UNAMA continued to provide technical assistance at the request of the Government. “This is what we are doing and we intend to do it in the future,” he said.