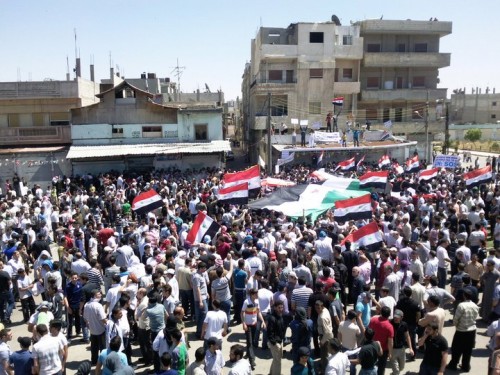 The head of Germany’s foreign intelligence warned in an interview that the regime of Syrian President Bashar al-Assad is in its final stages.

The head of the Federal Intelligence Service, Gerhard Schindler, told the Frankfurter Allgemeine Sonntagszeitung newspaper in an interview made public on Saturday that the Syrian conflict is reaching its final stage.   ”Signs are increasing that the regime in Damascus is in its final phase,” Schindler told the newspaper.

“Armed rebels are coordinating better, which is making their fight against Assad more effective,” he added.

As fighting between rebels and government forces rages Syrian rebels on Sunday seized control of a sector of Sheikh Suleiman base west of Aleppo, bringing them closer to holding a large strip of territory extending to the Turkish border in the north. The rebels took control of Regiment 111 and three other company posts located inside the base after fierce fighting overnight, the Syrian Observatory for Human Rights said. Rebels also declared Damascus International Airport a battle zone on Friday.

Meanwhile, Syria told the UN it would never use chemical weapons on its people, warning that ‘terrorist groups’ may resort to such weapons in the ongoing turmoil in the country.

“Terrorist groups may resort to using chemical weapons against the Syrian people… after having gained control of a toxic chlorine factory,” the foreign ministry said Saturday.

The comment follows accusations by Britain and the US that there is evidence that Syria is preparing to use chemical weapons.

Mr Hague told the BBC there was “enough evidence to know that they need a warning”.

That statement followed a warning on Monday from US President Barack Obama that there would be consequences if Syrian President Bashar al-Assad used chemical weapons against his people.