Assad says he will run in 2014 elections, downplays Hezbollah presence in Syria 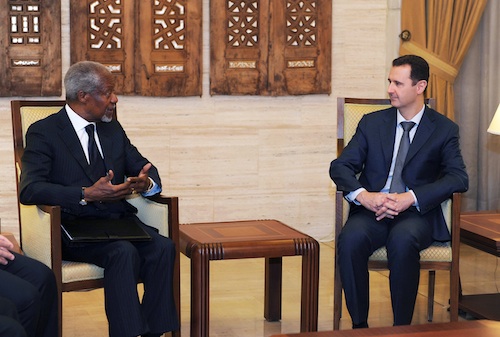 Syrian President Bashar Assad said on Thursday that he would run in the 2014 presidential poll if that is what the Syrian people want adding that he was “very confident” that his troops will prevail over rebel forces in Syria’s bloody civil war which began since March 2011.

Dozens of Hezbollah militants are said to be fighting alongside Syrian forces in Qusayr the since May 19, when government forces launched an offensive to recapture the strategic town near the Lebanese border. Earlier, US Secretary of State John Kerry said thousands of Hezbollah fighters were contributing significantly to the conflict in Syria.

Hezbollah’s leader, Hassan Nasrallah, said earlier this week that Hezbollah would fight in Syria until Assad’s survival was assured.

Assad, however, downplayed Hezbollah’s presence in Syria in his interview, saying that the number of fighters the Lebanese group had sent to his country was a “drop in the ocean” compared with the “hundreds of thousands” of Syrian government troops fighting against rebels.

“Logically speaking, if Hezbollah or the resistance wanted to defend Syria by sending fighters, how many could they send – a few hundred, a thousand or two? We are talking about a battle in which hundreds of thousands of Syrian troops are involved against tens of thousands of terrorists.”

Reports have said up to 4,000 Hezbollah fighters have joined forces with the Syrian military, which has claimed to be winning the battle, Al Jazeera said.

He noted that the timing of the Qusayr battle is linked to the “Israeli escalation”.

President Bashar al-Assad also said Syria would be willing to attend peace talks with the opposition in principle with the condition that anything agreed upon would be subject to the approval of the Syrian people through a referendum.

“Simply put, our only condition is that anything agreed upon in any meeting inside or outside the country, including the conference, is subject to the approval of the Syrian people through a popular referendum. This is the only condition. Anything else doesn’t have any value. That is why we are comfortable with going to the conference. We have no complexes. Either side can propose anything, but nothing can be implemented without the approval of the Syrian people. And as long as we are the legitimate representatives of the people, we have nothing to fear.”

Assad was referring to talks, backed by Russia and the US  next month in Geneva. Peace talks aim at finding a political solution to the country’s civil war.

On the other hand, the National Coalition said it will not take part in would not participate in the Geneva talks until the international community intervened to end a siege in Qusayr, a town in Homs province near the Lebanese border.