At start of Ramadan, Ban appeals to all parties in Syria to stop violence 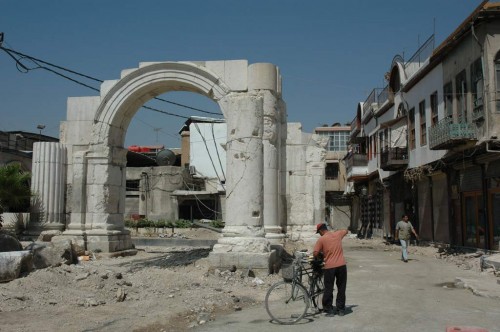 Secretary-General Ban Ki-moon has appealed to all parties in Syria to put down their weapons during the Islamic fasting month of Ramadan, adding that this gesture could help build momentum towards peace.

In a statement issued last night, Mr. Ban noted that Ramadan is one of four months in the Islamic calendar during which fighting is supposed to stop.

“For the sake of the Syrian people, therefore, I would like to call on all parties in Syria to respect this religious obligation for at least, at a minimum, one month,” Mr. Ban said.

“I am not calling for a contractual cease-fire or a negotiated truce. Nor am I referring to a measure limited to any one area. I am calling for every military unit of the regular army and the Free Syrian Army, for every person holding a gun, to stop fighting and offer this month of peace as a collective present to their people – and to do so across Syria.”

This will be the third Ramadan that Syrian people mark since fighting began in March 2011 between the Syrian Government and opposition groups seeking to oust President Bashar Al-Assad. Since then, as many as 100,000 people have been killed, almost 2 million have fled to neighbouring countries and a further 4 million have been internally displaced.

“I am aware that some may see this call as unrealistic,” Mr. Ban said. “Lasting peace will only come through serious negotiation. But I am convinced that the Syrian people have every right to ask this of all those who claim to be fighting in their name. These are the kinds of gestures that can build hope and momentum toward peace.”

Mr. Ban also called for the release of detainees by Government forces and opposition groups, saying there are reliable reports of hundreds of women and children who are detained in various official and non-official centres across the country.

“I appeal to all sides for the immediate release of all these detainees. I call on President Bashar Al-Assad to intervene personally to end this treatment and release all prisoners,” he said.

Mr. Ban acknowledged that lasting peace will only come through negotiation, and reiterated the UN would continue to work with Russia and the United States to build on their agreement to achieve a political solution to the crisis and organize a conference in Geneva that would bring Syrian parties to the negotiating table.

“As the United Nations and others work actively to prepare the conditions for a successful peace conference on Syria, the Syrians themselves should use the holy month of Ramadan of the Year 1434 in the Islamic Calendar to make a symbolic but powerful contribution to open the way to the solution of the crisis in their country,” Mr. Ban said.

“In issuing this appeal for a peaceful Ramadan in Syria, I would like to invite all in the international community who voice concern for the people of Syria – governments, international and non-governmental organizations, the humanitarian community, religious leaders, and others – to add their voices publicly in support. A clear message must be sent that yet more violence is not the way. The Syrian people deserve no less.”

UN agencies will also continue their humanitarian support to those affected by the conflict, he added.

Speaking to reporters in New York, the World Food Programme (WFP) Emergency Coordinator for Syria, Muhannad Hadi, stressed that it is extremely important that aid continues to flow into Syria until the crisis is over, as there are many families inside the country that now depend entirely on UN assistance for food.

“[People] don’t have credit cards, they can’t borrow, prices have skyrocketed where food is available [...] we have come to a stage in many places in Syria where either food is delivered by the World Food Programme, or they will go hungry.”

At the same time, Mr. Hadi drew attention to the increasingly difficult conditions that his agency is facing, including multiple checkpoints and getting caught in crossfire.

“We cross lines every day. It is extremely difficult and extremely challenging, but it is our determination that keeps us going,” he said, adding that WFP provides assistance to both Government and non-Government controlled areas.