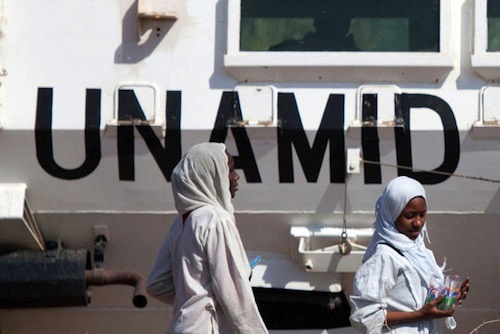 In a statement, Ban’s spokesperson said the Secretary-General was “outraged to learn of a deadly attack on peacekeepers […]” and said he expects the Government of Sudan will take swift action to bring the perpetrators to justice.

In a news release, the joint African Union-United Nations Mission in Darfur (UNAMID) said this morning one of its patrols was ambushed and came under heavy fire from a large unidentified group approximately 25 kilometres west of the Mission’s Khor Abeche team site.

Following an extended firefight, the patrol was extracted by UNAMID reinforcements that arrived from the Mission’s Khor Abeche and Manawashi sites.

Seven Tanzanian peacekeepers were killed and 17 military and police personnel, among them two female police advisers, were wounded.

Ban expressed his deepest sympathies to the families of the fallen peacekeepers, the Government of Tanzania and to all UNAMID personnel.

UNAMID Joint Special Representative Mohamed Ibn Chambas also condemned “in the strongest possible terms those responsible for this heinous attack on our peacekeepers,” and added that “the perpetrators should be on notice that they will be pursued for this crime and gross violation of international humanitarian law.”