‘Bahrain must free prisoners of conscience after outrageous verdict’ 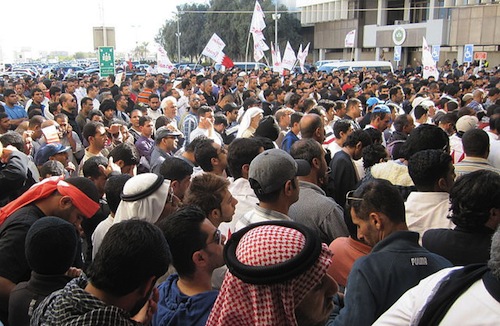 The decision by Bahrain’s appeal court to uphold sentences against 13 opposition activists and prisoners of conscience is outrageous and the authorities must ensure it is overturned and the activists immediately and unconditionally released, Amnesty International said.

The High Criminal Court of Appeal in Bahrain on Tuesday upheld the convictions and sentences of the 13 men, who were convicted last year before military courts on charges related to anti-government protests.

Amnesty International sent a trial observer to Bahrain who was present in court.

“Today’s court decision is another blow to justice and it shows once more that the Bahraini authorities are not on the path of reform, but seem rather driven by vindictiveness,” said Hassiba Hadj Sahraoui, Deputy Director of Amnesty International’s Middle East and North Africa Programme.

“Today’s verdict further engulfs Bahrain in injustice. Instead of upholding the sentences, ranging from five years to life in prison, the Bahraini authorities must quash the convictions for the 13 men who are imprisoned solely for peacefully exercising their human rights and release them immediately and unconditionally.”

The 13, who include prominent activist Abdulhadi Al-Khawaja and opposition political activist Ebrahim Sharif, were originally sentenced by a military court in June 2011 to between two years and life in prison on charges including “setting up terror groups to topple the royal regime and change the constitution”.

All maintain their innocence.

Farida Ismail, Ebrahim Sharif’s wife, said: “I was expecting this outcome as it is clear to us the government is not ready to be held accountable – its procedures continue as before.

“There is not enough pressure from abroad. What happens next will depend on which steps are taken by the international community and what states do in the next Universal Periodic Review session. As for our government, it is clear it is not ready for justice.”

The convictions and sentences of the 13 were originally upheld before a military court of appeal in September 2011.

But on 30 April 2012, the Court of Cassation ordered their appeal be held before a civilian court – a process which began on 22 May 2012 and ended with today’s verdict, which was announced in a session that lasted only three minutes.

Bahrain’s human rights record will be under scrutiny during the next Universal Periodic Review (UPR) before the Human Rights Council in mid September, when the Gulf state will have to confirm which recommendations made by its peers it accepts.

During the previous UPR session in June, 176 recommendations were presented to Bahrain, including key proposals that, if accepted, would signal commitment towards ensuring accountability.

“Bahrain cannot get a free pass at the UN Human Rights Council and we urge states to tell the Bahraini authorities that today’s verdict crosses a red line and that they can no longer be considered credible partners,” said Hassiba Hadj Sahraoui.

Despite the Bahraini’s government attempt to portray themselves as on the path to reform, little has been done on the ground to ensure accountability and true justice for victims of human rights abuses.

Violations are ongoing and prisoners of conscience remain behind bars.

Amnesty International also repeated its call to the authorities to order an immediate and independent investigation into some of the allegations made by defendants during previous court hearings, that they have been tortured and suffered other ill-treatment while in detention, including sexual assault, in order to coerce “confessions” from them.

Fourteen opposition activists were originally arrested between 17 March and 9 April 2011 after taking part in pro-reform protests in Manama. One of the men was later released.