Posted on: May 18th, 2012 by AlYunaniya Staff No Comments 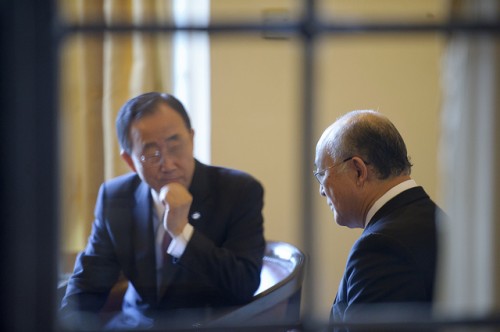 Ban Ki-moon, the UN secretary general, has stated that he believes al-Qaeda was responsible for last week’s bombings in Damascus, the Syrian capital, that left more than 50 people dead and close to 400 people wounded, Reuters quoted Ki-Moon as saying during his meeting with a youth delegation at the UN headquarters yesterday.

“A few days ago there was a huge, serious, massive terrorist attack. I believe that there must be al Qaeda behind it. This has created again very serious problems,”

“At least 55 people were killed and 400 others were wounded in blasts in Damascus on May 10, in the deadliest attacks in the Syrian capital since an uprising against President Bashar al-Assad began early last year,” he added.

Ban also talked about the two attacks against unarmed UN monitors trying to reduce the violence in the country.

There are 257 unarmed UN monitors in Syria to observe an  truce brokered by UN-Arab League peace envoy Kofi Annan.

“We are trying out best efforts to protect the civilian population.”  The UN chief said at least 10,000 people had been killed in the conflict while opposition groups put the figures to more than 12,000.

A week ago, Syrian U.N. Ambassador Bashar Jaafari said there had been an increase in “the scale and frequency of terrorist activities and operations in Syria” since a tenuous April 12 truce took hold.

He accused “some regional and international states” of sending fighters, funds and arms to “terrorist groups” in Syria.

Jaafari told the U.N. Security Council that 12 foreign fighters had been killed and 26 detained in recent clashes with Syrian forces associated with Al Qaeda.

“We have a list that contains 12 names of foreign terrorists killed in Syria, including one French citizen, one British and one Belgian,” Jaafari told the 15-member council.

He said a list of the 26 foreigners detained had been sent to U.N. Secretary General Ban Ki-moon and to the Security Council, according to AFP.

US and Russian officials have also said they believe al Qaeda and other violent militants are now operating in the country. Earlier this week Russia’s Deputy Foreign Minister said, “Al Qaeda stands behind the terror attacks in Syria,” referring to the Damascus blasts.