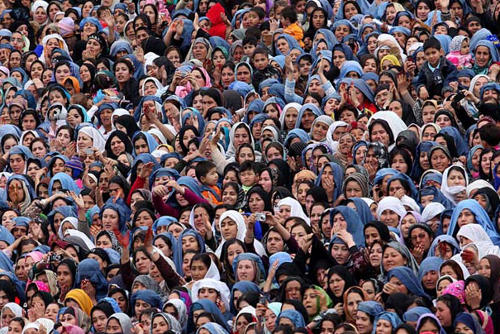 Secretary-General Ban Ki-moon is leading a United Nations call on world leaders to end violence against women, a scourge that affects millions of women and girls worldwide.

“Up to 70 per cent of women experience physical or sexual violence at some point in their lifetime” Mr. Ban said in message to mark the International Day for the Elimination of Violence against Women.

“Millions of women and girls around the world are assaulted, beaten, raped, mutilated or even murdered in what constitutes appalling violations of their human rights,” he added.

The UN General Assembly designated 25 November as the International Day for the Elimination of Violence against Women in a 1999 resolution inviting governments, international organizations and non-governmental organizations (NGOs) to “organize activities designed to raise public awareness of the problem on that day.” The day harks to the 25 November, 1960, assassination of the three Mirabal sisters, who were political activists in the Dominican Republic, on orders of Dominican ruler Rafael Trujillo.

Ban’s call reinforces a similar appeal made by the head of the UN agency committed to gender equality and the empowerment of women. UN Women Executive Director Michelle Bachelet used a video message to announce the launch of COMMIT, an initiative asking governments to make national commitments that will be showcased globally.

UN Women also administers the UN Trust Fund to End Violence against Women, which is the world’s leading global grant-making mechanism exclusively dedicated to addressing violence against women and girls. This month, it announced plans to disburse $8 million to local initiatives in 18 countries.

“We must do better to protect women,” UN Women Executive Director Michelle Bachelet  urged, as the agency noted in a press release that 603 million women live in countries where domestic violence is still not a crime.

In his message, Mr. Ban took the opportunity to shine a spotlight on additional outreach initiatives launched in his name. One is his landmark UNiTE to End Violence against Women campaign, launched in 2008. It gathers a host of UN agencies and offices to galvanize action across the UN system to prevent and punish violence against women.

“All too often, perpetrators go unpunished (while) women and girls are afraid to speak out because of a culture of impunity,” said Mr. Ban, adding the initiative was “engaging governments, international organizations, civil society groups, the media and ordinary citizens.”

He said his Network of Men Leaders initiative – which supports the work of women around the world to defy destructive stereotypes, embrace equality, and inspire men and boys everywhere to speak out against violence – was expanding.

“Despite all the advances in women’s rights around the world, violence against girls and women remains one of the most common human rights abuses – and the assault on their fundamental right to education continues in many countries,” UN High Commissioner for Human Rights Navi Pillay said in a news release issued from her Geneva-based office, stressing how violence against women and denying them education were often “closely related.”

From the Paris headquarters of the UN Educational, Scientific and Cultural Organization (UNESCO), Director-General Irina Bokova said that “Across the world, girls and women face violence as they try to exercise their basic rights,” and she stated in a press release how “Violence, and its threat, is one of the key factors forcing girls to drop out of school.”