Barroso in Athens: ‘Greece and Europe will make it’ 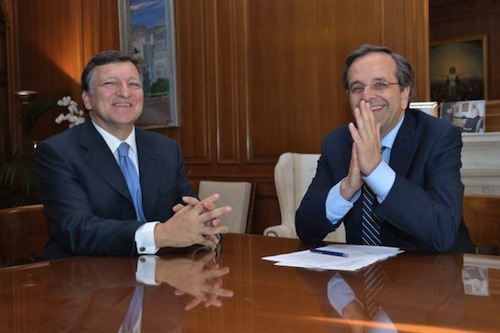 After his meeting with Prime Minister Antonis Samaras, European Commission president Jose Manuel Barroso said: “…Today I want to send a clear message to the people of this great country, of Greece. I know that many people feel without hope. Many are making extremely difficult sacrifices. And many people ask why they should do more.

I understand those concerns. And I agree that some of the efforts seem unfair. But I ask people to recognise the other alternatives which will be much more difficult for Greece and will affect even more the most vulnerable in the Greek society. So this is why it is the right approach to ask Greece to reform, to increase its competitiveness to have a viable future, irrespective of the crisis. You, in Greece, with our support, need to rebuild your country, your structures, your administration and your economy to increase the competitiveness of Greece. And the best hope of a return to growth and job creation is inside the euro area. Staying in the euro is the best chance to avoid worse hardship and difficulties to the Greek people, namely for those in a more vulnerable position

The Prime Minister has assured me that the coalition government will respect the commitments under the second programme and will speed up the key structural reforms that are needed, including the privatisation process and of course, also the reforms in the public administration, for instance, the reform against the tax evasion.

The key word here is: deliver. Deliver, deliver, deliver. The main issue is implementation to deliver results. To maintain the trust of European and international partners, the delays must end. Words are not enough. Actions are much more important. Following my meeting with Prime Minister Samaras, I am reassured that this delivery will happen.

In return I have been unequivocal that the European Commission will stand by Greece. I am here as a friend of Greece. I have repeatedly stated that Greece can make it, together Greece and Europe will make it. Greece is part of the European family and the euro area and we intend to keep it that way. All the heads of state and government of the euro area have stated in the clearest possible terms that Greece should stay in the euro as long as the commitments made are honoured. And there has been solidarity towards Greece.

The European Union and the wider international community have shown unprecedented solidarity with the people of Greece. We need a new consensus on reform and development so that Greece can grow again for the benefit of its citizens…”