Barroso, Rompuy and Schulz on Greece 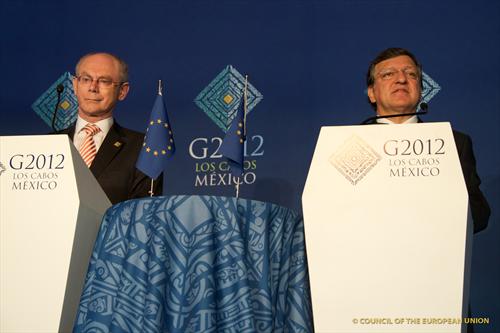 President of the European Commission José Manuel Barroso, ahead of the G20 Summit said the world’s waiting for the results of the Greek elections came to an end! “It is now crucial that a stable and cohesive Greek government be formed quickly. The new government needs to get to work swiftly to implement the economic reforms, which are needed to bring Greece back on its feet again. This was also my message…, when I personally congratulated the leader of New Democracy, Mr. Samaras, who has now the responsibility to form a government in Greece,” he said.

Barroso added: “I want, once again, to pay tribute to the courage and exceptional resilience of the Greek people. A lot of sacrifices are being demanded from them to redress their economy and move into a prosperous future.

The second economic adjustment programme agreed between Greece and the Eurogroup is the foundation to achieve this goal. We stand ready to continue to support Greece in its endeavour…”

President of the European Council Herman Van Rompuy ahead the G20 summit in Los Cabos, Mexico argued: “…We more than share the worries about the debt crisis in the Euro area. It’s in our own interest to overcome this crisis… The crisis has affected different countries in different ways. These divergences were reflected in the current account of the balance of payments. Today these divergences are decreasing significantly. So are the fiscal deficits in the Euro area. A common currency needs this convergence.

We continue also combining three ways of tackling this crisis: reforms at the level of the Member States and at the level of the Euro area; promoting economic growth with an active agenda on investment and at the same time ensuring differentiated fiscal consolidation; crisis management with new financial and governance tools (for instance recapitalising the banks) and at the same time deepening our economic and monetary union, so that the euro becomes an irreversible project…”

“…The Euro area Member States are determined, all the more after the choice made by the Greek people. Greece wants to stay in the eurozone. We are confident that the new Greek government will take ownership of the adjustment programme to which the Greek authorities had committed earlier this year. This is the basis upon which to build to foster growth, prosperity and jobs for the Greek people…”

I salute the efforts of the Greek people to overcome the crisis. They have made great sacrifices. I hope the burden of the reforms will be spread more equally to achieve greater social justice.

I hope that Greece will rapidly form a government that breaks the political deadlock and pursues the required reforms to overhaul the economy and Greek public finances. The Greek people deserve a stable and prosperous future.

I congratulate Antonis Samaras and his New Democracy party for winning the elections and I encourage the Greek political forces to form a responsible coalition government in the coming days.

I am particularly pleased with New Democracy’s declaration that they will broadly stick to commitments Greece has made to the European Union.

The new Greek government will be able to count on our constructive cooperation in possible fine-tuning of its reform strategy and economic targets. If Greece sticks to its commitments, the EU can examine what could be done further to solve the crisis.”