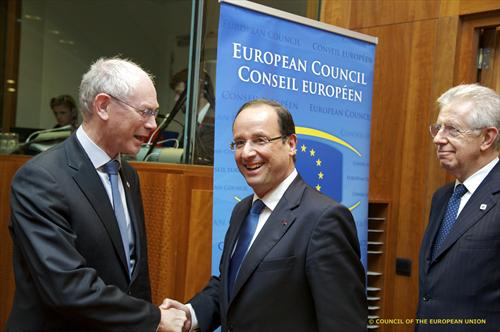 During an informal dinner on 23 May 2012, EU heads of state or government prepared the ground for common decisions to be taken at the European Council meeting scheduled for 28 and 29 June. In the short term, work will be structured around the three main pillars of a growth strategy.

President Van Rompuy said that growth must not be opposed to deficit reduction, as “both are two sides of the same coin”.

Leaders discussed a growth strategy “still based on the EU 2020 strategy” which “is the basis for our growth initiatives”. The three main pillars aim at mobilising EU policies to fully support growth; stepping up efforts to finance the economy through investments; strengthening job creation.

The heads or state or government also held an in-depth discussion of the latest developments in the euro area. In addition to noting that considerable progress has been made on various aspects, the commitment to safeguarding both financial stability in the euro area and its integrity was reaffirmed, and a general consensus was reached that the economic union has to be strengthened in order to make it commensurate with the monetary union.

President Van Rompuy added that in June he will report on the main building blocks and on a working method to achieve the latter objective.

An exchange of views on the political and economic situation in Greece showed that leaders wanted Greece “to remain in the euro area while respecting its commitments”. They expect that, after the elections, the new Greek government will choose to continue the vital reforms, as this is the best guarantee for a more prosperous future in the euro area.