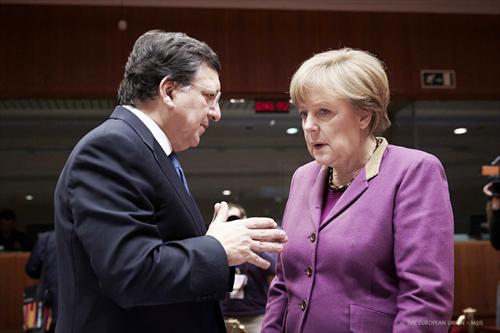 Eurozone unemployment rate peaked in February 2013 at 12% but this number says nothing about the real structural problems of the single money zone. The burning issue is the fast growing divergence of unemployment opportunities between the surplus countries in the North and the over indebted member states in the South, plus Ireland. According to Eurostat, the EU statistical service, in February the lowest unemployment rates were recorded in Austria (4.8%), Germany (5.4%), Luxembourg (5.5%) and the Netherlands (6.2%), and the highest in Greece (26.4% in December 2012), Spain (26.3%), Portugal (17.5%), Ireland (14.2%), Cyprus (14%) and Italy (11.4%).

How did this happen?

During the past three or four years, over-indebtedness and the draconian programs applied to cut down government deficits, were quickly translated into less and less economic activity and consequently into quickly increasing unemployment in the weak Eurozone countries. Only in Spain unemployment was endemic even before the crisis years. Ireland is also an exception, but a positive one, steadily overcoming now all its problems. However in all those high unemployment countries over-indebtedness and the real economy woes which followed, came seven years after the advent of the euro.

Until the first signs of the still ongoing crisis in the weak Eurozone economies appeared in the spring of 2009, all of them could borrow at the same interest rates as Germany. During the first two months of that year Greece had borrowed the unbelievable amount of around €50 billion. The financial environment though changed drastically in the summer of 2009 and towards the end of that year Greece became insolvent followed by Portugal and Ireland. Spain and Italy haven’t really joined this club but live under the Damocles Sword of their debts.

In short the introduction of the common European currency and the imprudence of the major German and French banks, in evaluating the creditworthiness of all Eurozone members with the same rate, drove many of them to the unsustainable region of debt. But it was not only the governments that borrowed heavily. All the peripheral banks were also offered practically unlimited credit from the major Eurozone banks in Germany and France. As a matter of fact at that time “the road to hell was paved with good intentions” and everybody thought the party will never end.

The existential questions for Eurozone then come freely. Was the advent of the euro the basic reason for the over-indebtedness of the weak countries? Can the weak Eurozone countries follow the example of Ireland and effectively confront their problems? Given that the first question has a rather historic character it seems that the second is the crucial one.

A free translation of the question is the following: Is it possible for Italy, Greece, Spain and Portugal and probably France to return to a sustainable growth path and start reducing unemployment? Of course all that, under the spell of a strong currency and the high cost or even unavailability of credit. Unfortunately the Eurozone has only made standard for everybody a disadvantage, the expensive euro. At the same time euro area financial markets are tragically fragmented. The cost and the availability of credit are drastically diverging between member states. Germany can borrow at almost zero interest rates, while at the same time Greece, Portugal, Cyprus and partially Ireland can’t borrow at all in the market, while Spain and Italy have to pay dearly for the refinancing of their debts.

This unsustainable arrangement has led to an also unsustainable situation in the labour market, with half of Eurozone being condemned to unseen before unemployment levels. And the next question comes naturally. Is the Eurozone itself sustainable, from an economic and political point of view given the situation in Greece, Italy, Spain, Portugal and now Cyprus? Can those economies start growing again in the foreseeable future, under the prevailing conditions?

This question is practically answered continuously but not yet conclusively in the streets of Athens, Rome, Madrid, Lisbon and Nicosia. The endurance of the political system in all those countries is tested every day. The stress on many occasions is so intense that an accident may happen. The reliance on the police forces is increasing all over the South. For how long can this continue? The option to leave the single currency zone is no more a taboo in the South. Hopefully the North has being informed about this.

As things stand now the disintegration of the Eurozone may come as an accident. Berlin has miscalculated many times in the last hundred years the reaction of the others. Is Germany once more being short-sighted? Unemployment is slowly but steadily feeding the political explosion and unfortunately the extinguishers are gradually been withdrawn. Bail-ins prevail.

From the europeansting.com. By permission.