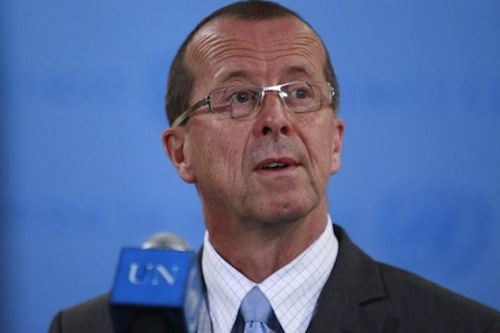 The top United Nations envoy in Iraq has strongly condemned the series of bombings that struck several Shiite neighborhoods in Baghdad on Sunday, killing and injuring dozens of people as it struggles with protests and a political crisis.

Several car bombs exploded across the Iraqi capital, including in busy outdoor market areas. At least 20 people were killed and scores more were wounded in the attacks, which reportedly targeted mainly Shia areas.

“Once again, innocent civilians going about their daily business have been targeted, bringing great grief to their families and communities. Nothing can justify these terrorist attacks,” said Martin Kobler, the Secretary-General’s Special Representative and head of the UN Assistance Mission for Iraq (UNAMI).

“All Iraqi leaders have a responsibility to stand up against these atrocious crimes targeting the social fabric of the country.”

No-one has claimed responsibility for the attacks.

Sunday’s blasts follow assassination of the head of Iraq’s intelligence academy, Ali Aouni officer on Saturday who died in a suicide blast in the northern town of Tal Afar.

Earlier this month, at least 25 people died and about 100 were injured in a wave of car bombings in mainly Shia areas of Iraq.

Thousands of Sunnis have held demonstrations in several cities since December, accusing the Shia-dominated government of Prime Minister Nouri Maliki of monopolising power.