Catherine Ashton: ‘Assad has no place in the future of Syria’ 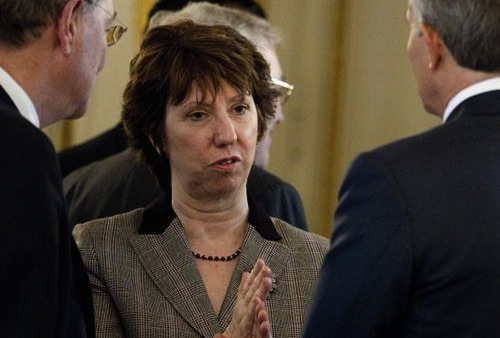 EU High Representative for Foreign Affairs and Security Policy Catherine Ashton in a speech yesterday in European Parliament on the latest developments in the Middle East and Syria argued:

“We are all appalled by the sickening violence we continue to witness in Syria. Security forces and militias have bombarded cities with no regard for civilians. There have been massacres and point-blank killings. We have seen it last week in a village near Hama, and the week before in Houla, where security forces and militias killed men, women and children. Those responsible for these crimes must ultimately be held to account and we must do everything to stop the bloodshed.

We are at a critical moment. The situation is deteriorating day by day as the regime’s behaviour reinforces the most radical elements on all sides. And yet, most ordinary Syrians long for a transition that avoids bloodshed and keeps the country together – respecting minorities. If the descent into further militarization continues, it will not only spell disaster for the people of Syria, but also the broader region, including Lebanon, where developments are extremely worrying.

As I discussed with Kofi Annan – over recent weeks and again on Friday – we must spare no effort to avoid a catastrophe. Assad has no place in the future of Syria. His regime fails to comply with its own commitments and everyday underlines its lack of legitimacy. The implementation of Annan’s plan is not easy and some have questioned its viability. Yet, despite all the challenges, it remains today the best way forward.

We must act decisively to prevent further bloodshed while avoiding fuelling the flames of sectarian violence.

The only way forward now is to reinforce Kofi Annan’s leverage with the Syrian Regime and make his Mission more effective. No other option has been able to gather any kind of international support. Kofi Annan – to whom I pay tribute for his extraordinary efforts in exceedingly difficult conditions – has the support and legitimacy of the international community (UN) and the Arab League. As SG Ban-Ki Moon told the General Assembly on Thursday: the Annan plan must remain the centre piece of our efforts. But that alone is not enough. We need to do much more to further isolate the regime, build real and operational international consensus, strengthen international sanctions and press the government towards compliance and transition.

As Kofi Annan himself has made very clear, all concerned, and in particular the Members of the UN Security Council and those who have influence on the Regime, Russia and China in particular, must unite and apply more effective pressure to find a solution.

That is why we need to agree on a roadmap that reinforces Annan and his plan. This should involve 3 key priorities: 1) a more effective contact group, including Russia and China, to coordinate support to Annan and exert influence on the Regime. I therefore welcome the idea of a “Contact group” of key actors on the Syrian crisis as announced by Kofi Annan last Thursday in the UNSC. The international community must show unity in this critical moment. 2) united action by the UNSC to add more robust and effective pressure, including the reinforcement of sanctions under Chapter VII; and 3) international consensus around a political process and transition.

With these priorities in mind, I have engaged with Kofi Annan and other leaders to seek a new consensus, including in Istanbul last week, where I attended a special meeting on Syria and at the recent EU-Russia Summit.

Work on the political process cannot wait. It is crucial for the credibility of the international efforts and to show the Syrian people that there is a path leading to a better rather than a more fragmented Syria. But for this to happen, the opposition must finally come together and put its differences aside – new leadership is not enough. A stronger and more united opposition that represents a credible alternative for all Syrians is essential. We discussed on going efforts with Turkey and we are coordinating closely with the Arab League. We continue to meet the different factions and groups in the opposition. Now we are working on two seminars that will feed into the Arab League plans to organize a larger meeting.

In addition to our sanctions, diplomatic efforts, and support to the UNSMIS Mission, which are highly appreciated by the UN, humanitarian assistance remains the top priority for the EU. Innocent civilians and children are paying the consequences of this crisis. I am working closely with Kristalina Georgieva to use all the tools and instruments to deliver our assistance.

The EU has already allocated over EUR 28 million to address the humanitarian needs inside Syria and in neighbouring countries. Now the Syrian Government must implement the agreed comprehensive humanitarian response plan without excuses and delays.

Last week the Commission approved the EUR 23 million special measure – that I had previously announced in this plenary – to support civil society within Syria and neighbouring countries hosting Syrian refugees.

During my visit to Istanbul last week, my Crisis Coordinator engaged with the Turkish authorities and visited the Camps at the border. I offered any further help Turkey may need. Turkey is doing a truly great job in dealing with Syrian refugees and they can count on our support.

We will continue to call for accountability and support UN efforts in this regard. This is something we owe to the victims. The UN is investigating the latest massacres and the Human Rights Council – with our full support – is setting up a Committee of Investigation.

While some Member states have decided to withdraw and expel Ambassadors, our Delegation in Damascus will remain open for as long as possible. This has been the request of many of you and, most importantly, of Syrians themselves. They are our ears, eyes and hands to help are needed there.

On the MEPP our objective remains the same. I have been very clear from the beginning of the Arab Awakening that developments in the region make the peace process and a negotiated solution even more urgent and important, not less. While we are all paying a lot of attention to the situation in Syria, Egypt and elsewhere, ending the conflict remains a top priority and a fundamental EU interest.