Clashes in Beirut amid mounting fears of Syria spillover 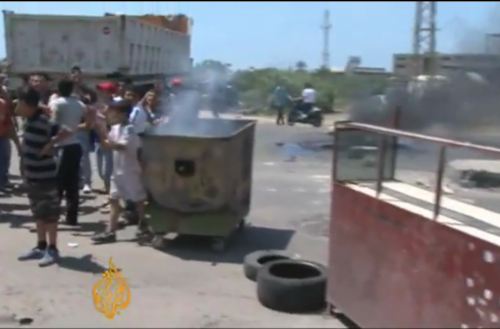 Clashes have erupted in the capital Beirut of Lebanon during the night between pro and anti Syrian regime groups leaving two people dead and 18 others injured, Lebanon’s state-run news agency said on Monday.

Violence erupted hours after reports emerged that army troops had shot dead an anti Syrian regime Sunni cleric when his convoy failed to stop at a checkpoint in north Lebanon on Sunday, AFP reported.

The incident which raised fears of a repeat of sectarian conflict in 2008,  took place following a week of clashes in the northern port city of Tripoli between Sunnis hostile to the Syrian regime and Alawites who support President Bashar al-Assad.

The uprising in Syria has resulted in a deep split between Lebanon’s political parties where the opposition backs those leading the revolt against Assad and accuse the Lebanese government of following orders of the Syrian regime while a ruling coalition led by the Shia Hezbollah supports the regime, Al Jazeera reported.

Last week, clashes sparked by the Syrian crisis killed at least eight people in the northern city of Tripoli.

The Syrian National Council in a statement issued two days ago has called on Lebanese authorities to abide by the Arab League and International sanctions imposed on the Syrian regime and to prevent the wire fraud and money laundering conducted by Syrian regime in collaboration with some of its allies in Lebanon.

Prime Minister Najib Mikati tried calm tensions by stating, “The government is determined to continue to shoulder its national responsibilities amid this critical period in Lebanon and the region, and it will take all measures necessary to preserve civil peace,” he said in a statement.

More than 12,000 people, the majority of them civilians, have died in Syria since an anti-regime revolt broke out in March last year, according to the Syrian Observatory for Human Rights.