Clinton in Turkey for Syria talks amid new US sanctions on Syria, Hezbollah 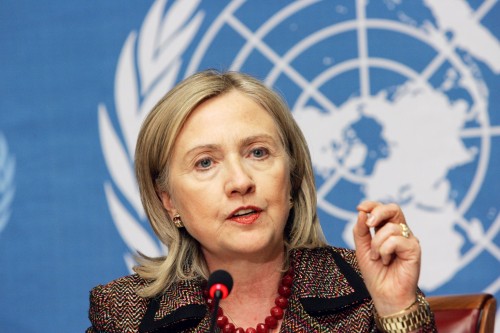 Clinton traveled to Turkey after wrapping up a 11-day nine-nation Africa tour. In Istanbul, Clinton will have “lengthy and in-depth conversation” with Turkey’s president, prime minister and foreign minister that will focus on adding pressure and isolating the Syrian regime, extending humanitarian assistance to Syrian refugees in Turkey and to discuss a democratic transition in post-Assad Syria a U.S. official said.

Clinton is expected to propose with Turkey’s leaders ways to effectively impose sanctions against the Syrian regime. Syria’s relations with Turkey have hit their lowest point after a Turkish fighter jet was shot down by Syrian fire in June.

In Istanbul, Clinton is also expected to announce an additional $5.5 million in aid for those fleeing fighting that monitoring groups say has now claimed over 21,000 lives.   Turkey is currently home to more than 50,000 refugees living in camps along the Syrian border.  The UN announced on Friday that there were more than 6,000 new arrivals in Turkey this week alone, many from the Syrian city of Aleppo and surrounding villages, while others came from Idlib and Latakia.

Meanwhile, the US on Friday imposed sanctions on the Syrian state-run oil company Sytrol for conducting business with Iran, in a bid to cut off revenues to the Iranian and Syrian regimes, according to a statement by the State Department.

State Department spokesman Patrick Ventrell said the penalties against energy firm Sytrol come after it delivered $36 million worth of gasoline to Iran in April significantly exceeding the monetary thresholds for triggering sanctions under this law.

The U.S. Treasury also said it was adding the Lebanese Shiite militant group Hezbollah, which has close ties with Iran and Syria, to a blacklist of organizations targeted under Syria-related sanctions.

Meanwhile, Fighting has spilled across the border, as Jordnanian and Syrian forces clashed in the Tel Shihab-Turra border region on Friday, according to Al Jazeera.

A source in Jordan confirmed the fighting but said there seem to have been no Jordanian deaths.