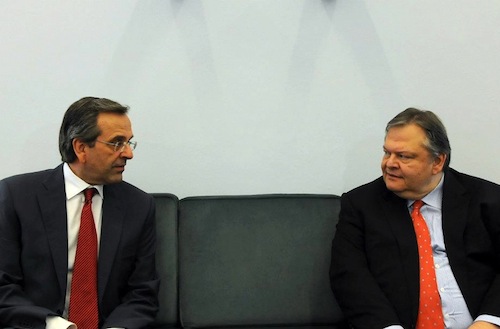 According to Kathimerini, the three government parties appear to remain in disagreement about the property tax attached to electricity bills (introduced in September 2011 as an emergency levy).

Democratic Left is adamant that the government should not renege on its original promise to replace the levy with a unified property tax. PASOK also wants the levy to be substituted with “a fairer tax.”

Sources close to Samaras told the paper that the two coalition partners appeared to be competing with each other in displaying social sensitivity rather than backing efforts to push through reforms pledged to creditors to secure a EUR 2.8-billion tranche of rescue aid for March.

As protothema.gr writes, the climate in the government headquarters is heavy as delays and deficiencies arebeing spotted that will complicate the troika negotiations. According to AMNA, Finance Minister Yannis Stournaras briefed representatives of PASOK, Filipos Sachinidis and Democratic Left party, Dimitris Chatzisokratis on all issues that still remain pending in talks between the government and the troika, over the reimbursement of the next tranche of the country’s rescue loan.

Meanwhile, the National Association of Train and Railway Personnel and Suburban Workers Union are moving to 8-hour repetitive work stoppages today until Friday, April 5, from 16.00 until midnight; passengers should expect cancellations and changes to TRAINOSE routes (trains, suburban).

According to media reports, employees require the signing of a new collective bargaining agreement, speak of their unwarranted inclusion in the single payroll and react to the privatization of TRAINOSE.