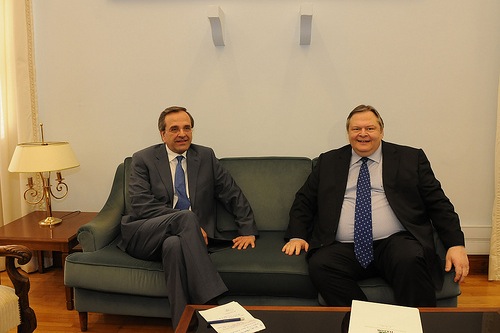 Coalition partners remained EUR 2-3 billion short yesterday of the 11.5-billion-euro total that its lenders have demanded , whereas the scramble to find the remaining cuts has put the relationship between New Democracy and its coalition partners, PASOK and Democratic Left, under strain, Kathimerini writes.

Prime Minister Antonis Samaras and his coalition partners Evangelos Venizelos and Fotis Kouvelis meet today at 1 p.m. Samaras is to seek to forge a common line with his coalition partners on the measures before traveling to Rome for a three-day official visit. FinMin Stournaras, who is to stay in Athens and continue talks with the troika, has said he hopes for a final agreement on the measures by Sunday.

Meanwhile, Finance Minister Yannis Stournaras met again yesterday afternoon with the troika head representatives in an on-going effort to finalise the EUR 11.5-billion austerity package. According to NET state television, a list of harsh measures “were back on the table” including reductions to low-level pensions, raising of the retirement age and further cutbacks to state administrative costs.

Finance ministry sources told protothema.gr the measures for EUR 2 billion that have been finalised and covered a part of the financial gap of EUR 4 billion, came from cuts in Health, Defense and local authorities. “There is still the tough core”, sources he told reporters, meaning the extra measures of EUR 2 billion that are being examined and will be for salaries and pensions.

According to Protothem.gr, troika is now pressing so the EUR 9.5 billion from the EUR 11.5 billion be saved from cuts in wages and pensions, instead of the EUR 7 billion in the original plan. Officials are also discussing horizontal wage cuts to public administration, at the rate of 5%.

The government aims to save EUR 8.5 billion euros from cuts to salaries, pensions and benefits. And if they add another EUR 1 billion, expected to be collected from the increase in the retirement age from 65 to 67 years, then imposed cuts will reach EUR 9.5 billion.Reductions to pensions will start much lower, perhaps from EUR 600 in total, rather than EUR 1,000. Officials are also thinking of cutting the minimum IKA pension close to EUR 400, and re-thinking of cutting the minimum OGA pension from EUR 360 to EUR 330. It is now almost certain that the already agreed measures include the elimination of the remainder of the 13th and 14th salaries in the public sector and the elimination of the 13th and 14th pensions for all pensioners.