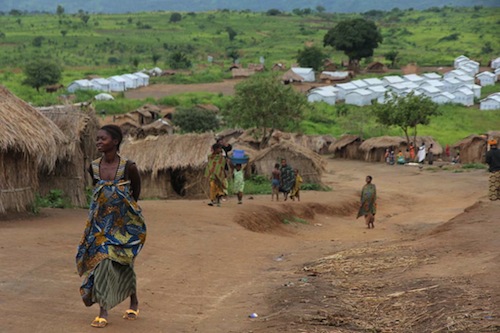 The United Nations World Food Programme (WFP) warned that the security situation remains volatile in the so-called “Triangle of Death” – the area between the towns of Pweto, Mitwaba and Manono, in the Katanga province of the Democratic Republic of the Congo (DRC).

According to WFP Spokesperson Elisabeth Byrs, deteriorating humanitarian conditions and ongoing attacks from Mai Mai fighters have forced more than 200,000 people to flee their homes since April.

“Inside this triangle, because of attacks of armed groups, the population have left and they have taken refuge in the three cities,” she said, adding that the constant attacks, lootings, rapes had first sent the population fleeing into the bush. They then took refuge in the cities, where the World Food Programme is assisting them with food rations and humanitarian assistance.

There are currently 354,000 internally-displaced persons (IDPs) in Katanga province, according to UN estimates, a significant increase from 55,400 in January 2012.

Despite insecurity and poor road conditions WFP has managed to reach some 250,000 people displaced from the Triangle with one-month rations during the past 12 months. The agency has also reached approximately 66,255 people in Pweto.

In Maniema food insecurity is still very high, Ms. Byrs said, with at least 42 per cent of households vulnerable to it. The causes for this include a lack of infrastructure, low agricultural productivity, and insecurity in the neighbouring provinces of North and South Kivu. In addition, the isolation of the region negatively affected food prices and household food access.

Byrs said WFP is supporting more than three million beneficiaries in DRC, and is seeking $28.9 million to continue its operations in the country to secure the food resources over the next six months.