Posted on: August 25th, 2012 by Julie Jalloul No Comments 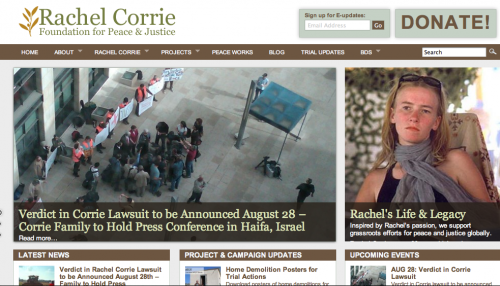 The verdict in the civil lawsuit against the State of Israel for the killing of peace activist Rachel Corrie over nine years ago will be announced August 28 at the Haifa District Court, according to  statement released by the Rachel Corrie Foundation.

Israel has failed to carry out the “thorough, credible and transparent investigation” it had promised into the death of American activist Rachel Corrie in Gaza nine years ago, the US ambassador in Tel Aviv reiterated to her family on Friday, according to the Independent.

The lawsuit, filed in 2005 on behalf of the Corrie family by attorney Hussein abu Hussein, charges the State of Israel with responsibility for Rachel’s killing and failure to conduct a full and credible investigation in the case.

“The lawsuit is just a small step in our family’s nearly decade-long search for truth and justice,” said Craig Corrie, Rachel’s father. “The mounting evidence presented before the court underscores a broken system of accountability – tolerated by the United States in spite of its conclusions that Israel’s military investigation was not ‘thorough, credible, or transparent.’”

Oral testimony in the case began March 10, 2010. There have been 15 court hearings since with 23 witnesses testifying. The trial has exposed serious chain-of-command failures in relation to civilian killings and indiscriminate destruction of civilian property at the hands of the Israeli military in southern Gaza.

“This trial is an attempt to hold accountable not only those who failed to protect Rachel’s life but also the flawed system of military investigations which is neither impartial nor thorough,” said Hussein abu Hussein, the family’s attorney. “Under international law, Israel is obligated to take all feasible precautions to spare civilians from the dangers of military operations. The Israeli military flagrantly violated this principle in the killing of Rachel Corrie and it must be held accountable.”

Judge Oded Gershon’s reading of the verdict is expected to be brief. The Corrie family will hold a press conference following at the Colony Hotel, a short distance from the courthouse.