Crucial visits and meetings in Athens 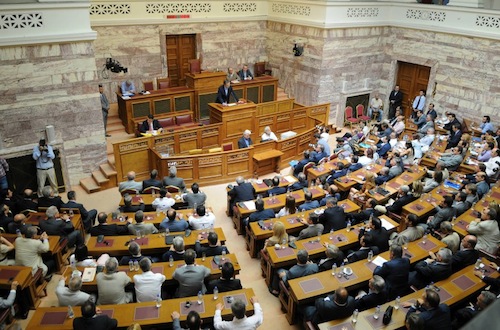 Since early morning Tuesday, troika’s technical teams are scrutinizing the Budget in view of the meetings troika heads will have with Finance Minister Yannis Stournaras on Thursday and the Prime Minister Antonis Samaras on Friday.

Tomorrow, Thursday, European Commission President Jose Manuel Barroso is expected to arrive in Athens. He will meet with Prime Minister Antonis Samaras. U.S. Treasury Assistant Secretary for International Finance Charles Collyns is also expected to arrive to convey -tovima.gr writes- US President’s concerns for the crisis in the Eurozone and the state of the Greek economy.

According to media reports, yesterday morning, a 12-member troika middle-level troika team visited the Ministry of Finance and had meetings with Yannis Stournaras’ staff. Sources so far suggest that the troika will not negotiate anything in terms of objectives, insisting on cuts in wages and pensions.

In official statements, Reuters reports, both the EU and the IMF have said the programme was behind schedule and needed to be re-launched before Greece could get any more funds, with the next tranche not expected to be disbursed before September. “An IMF mission will start discussions with the country΄s authorities on July 24 on how to bring Greece΄s economic program, which is supported by IMF financial assistance, back on track,” an IMF spokesman said on Monday.

EU Commission President Jose Manuel Barroso will meet Prime Minister Antonis Samaras on Thursday [July 26] in Athens to discuss the country΄s progress under the bailout plan. “Mr. Samaras and President Barroso… will discuss the overall situation in Europe and obviously particularly focusing on Greece,” EU Commission spokesman Alejandro Ulzurrun told reporters in Brussels. Barroso is also due to meet in the early afternoon July 26 with the leaders of the junior members in the coalition government, PASOK and Democratic Left leaders Evangelos Venizelos and Fotis Kouvelis respectively.

Addressing New Democracy party’s parliamentary group yesterday, Prime Minister Antonis Samaras said it is the government’s aim to proceed immediately with structural changes and reforms, aiming to reverse the climate for Greece abroad, kick-start growth and set the base for the renegotiation of the bailout agreement.

According to ANA, Samaras noted that this was the first time in the last 38 years (since the restoration of democracy in Greece) that there was a convergence on policy among three political parties that were focused on completing the full four-year term.