Posted on: January 2nd, 2013 by AlYunaniya Staff No Comments 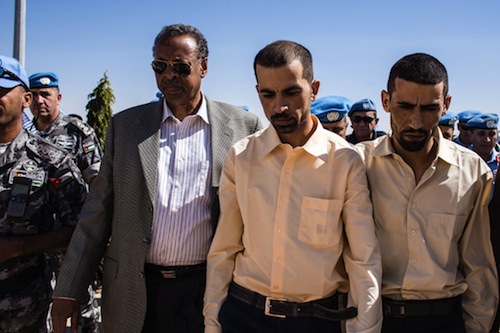 Two United Nations peacekeepers who had been abducted in Sudan’s Darfur region were released today, after 136 days in captivity.

Serving with the UN-African Union peacekeeping mission in Darfur, known by the acronym UNAMID, the two police personnel – Hasan Al-Mazawdeh and Qasim Al-Sarhan, both Jordanian nationals – had been abducted by unidentified assailants on 20 August last year while on patrol in the town of Kabkabiya, located approximately 140 kilometres west of El Fasher, the capital of North Darfur state.

“Both Mr. Al-Mazawdeh and Mr. Al-Sarhan appear to be unharmed and in good health. They will be flown to Khartoum and back to their home country as soon as possible,” UNAMID said in a news release.

According to the release, the peacekeeping mission’s head, the Secretary-General’s Acting Joint Special Representative, Aichatou Mindaoudou, expressed UNAMID’s thanks to the Government of Sudan, the governor of North Darfur and the Government of Jordan for their “valuable” assistance in obtaining the safe release of the peacekeepers.

In addition, UNAMID is calling on the Government of Sudan to investigate the kidnapping and find those responsible.

In a statement, the spokesperson for Secretary-General Ban Ki-moon said that the UN chief is “deeply gratified” over the release of the two UN staff members, and commends the efforts of UNAMID and the Governments of Sudan and Jordan in securing their release.

“He underscores the importance of the peacekeeping and humanitarian work in Darfur and calls on the Government to fully investigate the incident and bring the perpetrators to justice as soon as possible,” the spokesperson said.

He added that Secretary-General Ban also reiterates that the “primary responsibility” for the safety and security of all of UNAMID’s peacekeeping personnel and the humanitarian community in Darfur lies with the Sudanese Government.

Established in July 2007, UNAMID has the protection of civilians as its core mandate. In addition, the peacekeeping operation is tasked with other responsibilities, such as facilitating the delivery of humanitarian aid and assisting with an inclusive peace process in Darfur, where fighting broke out nine years ago, pitting Government forces and allied militiamen against rebel groups.