Posted on: June 13th, 2012 by AlYunaniya Staff No Comments 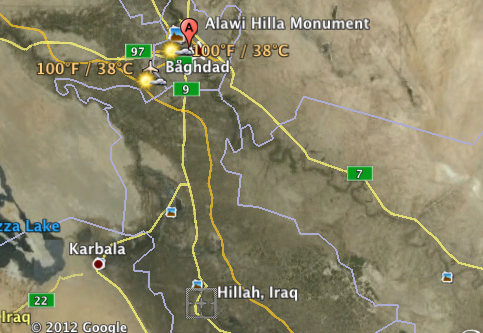 In one of the deadliest wave of bombings since March, 56 people have lost their lives and 150 injured in the cities of Baghdad and Hillah on Wednesday during a major religious event,  official sources said.

At least 30 people lost their lives on Wednesday when four bombs hit Shia pilgrims across Baghdad as they gathered to mark the anniversary of the death of Shiite imam Moussa al-Kadhim, a great-grandson of Prophet Muhammad, according to Al Jazeera.

Al-Qaeda’s Iraqi affiliate, Islamic State of Iraq, claimed responsibility for the attack on the religious office, according to AP.

On Sunday at least six people were killed when two mortar bombs struck a Baghdad square packed with Shia Muslim pilgrims.  Earlier this month, 26 people were killed and more than 190 wounded when a bomb denotated by suicide bomber exploded outside a Shia religious office in the capital.

Violence in Iraq has decreased  since its peak in 2006-2007, but attacks persist, especially in Iraq’s capital, Baghdad.

Political tensions have been high in Iraq since the last US troops pulled out in December, with the country’s fragile government, divided among Sunni, Shia and ethnic Kurdish blocks.