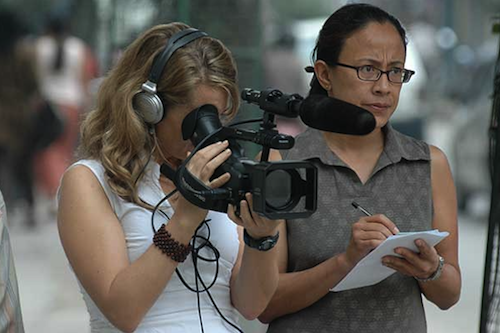 Reporters Without Borders is very concerned about a judicial investigation into TV journalist Dina Abdel Fattah that is indicative of the decline in freedom of information in Egypt.

Fattah is being investigated on suspicion of “promoting terrorism” because she invited members of “Black Bloc,” a new protest movement that has become the government’s bugbear, to participate in “Al-Shaab Yourid” (The People Want), the political programme she used to host on Al-Tahrir TV.

She and Khairi Hassan, one of the programme’s producers, were summoned to the public prosecutor’s office for questioning on 10 February. Both were then released later the same day on bail of 5,000 Egyptian pounds (570 euros), which was paid by the journalists’ union.

The prosecutor’s office said it opened the investigation after receiving 238 complaints about her. Members of the Shura Council (the upper house of Egypt’s parliament) also filed a complaint, accusing the programme of being a “threat to public order” and an “incitement to vandalism.”

Many journalists, NGOs and lawyers reacted by rallying to Fattah’s defence.

“We condemn the repressive measures that the Egyptian government has been taking against journalists and we call for the withdrawal of this investigation into Fattah,” Reporters Without Borders said. “Journalists must be able to cover the new protest movements rocking Egypt, whether the government likes it or not. Gagging the media just fuels instability.”

“The number of complaints against journalists has soared since Mohamed Morsi’s election as president. The judicial investigations and proceedings are clearly designed to restrict freedom of information. We urge the authorities to end their policy of harassing journalists and news providers.”

After Al-Tahrir TV cancelled her programme on 24 February, Fattah announced that she was resigning in protest against a violation of freedom of information. Al-Sayed El-Shazli, the president of the Egyptian Media Syndicate, said the authorities probably told the TV station not to broadcast it.

Egypt is ranked 158th out of 179 countries in this year’s Reporters Without Borders press freedom index.