Posted on: January 26th, 2012 by Julie Jalloul No Comments

Egyptians in Greece celebrate one year on; revolution continues 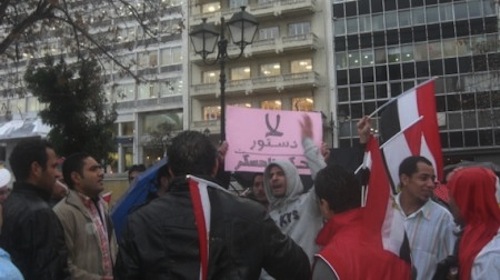 After 3 decades of political stagnation, nobody imaged big political change possible on the eve of the protests a year ago when Egyptians lived in Mubarak’s strongly controlled police state. While sounds of joy echo, today, the streets of Egypt, halfway around the globe, Egyptians in Greece mark the anniversary of the uprising that put an end to Mubarak’s repressive rule.

With jubilance and optimism for the future of their country, Egyptians in Greece gathered under the rain on Wednesday in Syntagma Square to do three things: commemorate their revolution, memorialize the people who died and demonstrate against the country’s ruling generals.

“Down with military rule” and “Revolution until victory” chanted the crowd.

Since February 11 last year when Mubarak was driven out the military council has assumed power and is led by the man who was Mubarak’s defense minister for two decades, Mohamed Hussein Tantawi. The army has promised to relinquish power to an elected civilian government. In this time there have been a growing number of military trials, new anti-protest laws and protesters have been detained. In response, protests have continued in Tahrir Square.

“Definitely, the revolution has not achieved its goal. The revolution continues until it realizes its goal; that’s when we will really celebrate,” says Egyptian and president of the Muslim Association of Greece Naim EL Ghandour.

The words “freedom”, “Democracy” and “revolution” punctuated all talks in Syntagma Square. There was a sense of bewilderment that went along with the words, but most of all joy.

The Anthem of the Egyptian Revolution “Ya Beladi” meaning “My country” played over the loud speakers and people started singing some with tears in their eyes while others waving their flags and chanting “My country”. Suddenly, everything went dark and hundreds of candles lit to remind the world of the souls that have been lost.

“A great victory has been achieved. A victory of dignity. The victory is not only ours but of all oppressed people around the world. It is time to celebrate. Long live the Egyptian revolution” says Egyptian Taghrid in an interview with Postnews.

But underneath the jubilation there seems to be a sense of responsibility. What will become of Tahrir square where thousands of people lost their lives in clashes with security forces before Mubarak stepped down? With elections underway, how does the future of the Egyptian people look and what are the challenges that lie ahead?

The events in Tahrir Square indubitably mark the beginning of a new era for Egypt. But while the future holds many big questions for the Egyptians, the revolution continues.