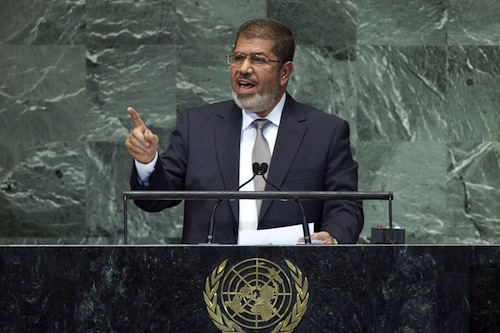 After three weeks of mass protests, Egyptians headed to the ballot boxes in the first round of the constitutional referendum in Egypt backed by President Mohamed Mursi and Islamist allies, with initial results indicating that supporters of the draft document have a narrow lead.

The early result of the poll is based on unofficial tallies that emerged on Sunday. Official results are not due to be released until the second round on December 22.

The Muslim Brotherhood said the group’s tallies showed that 56.5 per cent of voters had supported the constitution, while 43 per cent had voted ‘no’, according to results posted on their website ikhwanweb.com.

“The Freedom and Justice Party (FJP)’s central operations room followed the course of the vote on Egypt’s new Constitution Saturday. Our monitors noted a large turnout of voters. They further noted that the operation flowed smoothly, in a systematic manner, without incident, in the vast majority of polling stations in all governorates,” the Muslim Brotherhood said in a statement.

The vote this time is on a 63-page document that would be Egypt’s post-revolution constitution, and which has been the subject of a growing rift between Islamist forces and their opponents, who oppose the draft for not representing all Egyptians.

The main opposition coalition, the National Salvation Front, had announced on Saturday night after polls closed that almost two thirds of voters had rejected the constitution drafted by an Islamist-dominated council, AP reported..

If the constitution is approved, Mursi hopes it will end a tumultuous transition almost two years after a popular uprising that pusted president Hosni Mubarak.