European and African Union meet to discuss next Africa-EU Summit 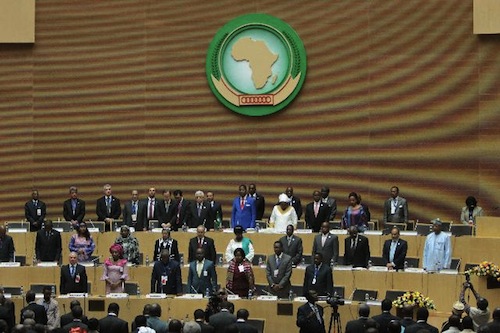 European Commission President José Manuel Barroso and six European Commissioners will meet their African Union (AU) counterparts on 25 and 26 April, in Addis Ababa, Ethiopia. The high-level event, which takes place in year of the 50th anniversary of the Organisation of the African Union (OAU), will launch the preparations of the 4th Africa-EU Summit, due to take place in Brussels in April 2014.

The meeting will further strengthen bilateral cooperation and political dialogue between the two continents, promote shared interests and tackle common regional and global challenges within the Joint Africa-EU Strategy.

President Barroso said: “Africa and Europe are each other’s closest neighbours. The partnership between the European Commission and the African Union is becoming ever more relevant by the day. I look forward to our next College-to-College (C2C) meeting, an event which symbolises the cooperation, convergence and complicity between the two sister organisations that have been driving regional integration in both Europe and Africa. I am proud of what we have achieved together so far. And I am convinced that we can do much more in the future by jointly tackling our shared challenges, from climate action to regional security, eradicating poverty and sharing the benefits of trade and growth.”

The EU is the biggest trading partner for Africa and remains its most important donor. African countries received close to €24 billion of Official Development Assistance (ODA) from the EU in the period 2007–2012.

The meeting between the two Commissions will start with keynote speeches from AUC Chairperson Zuma and President Barroso, followed by a plenary discussion and thematic meetings of Commissioners. The discussions will cover regional integration, trade and infrastructure, economic governance and raw materials, as well as customs and taxation. Other key topics will be the environment and climate action, sustainable energy and agriculture, food safety and security, resilience, education, employment, health and migration.

A common challenge for both Africa and Europe remains to consolidate sustainable economic growth and ensure that it is inclusive in creating jobs, especially for women and young people. This requires coordinated action at continental, regional and national levels. In this context, the issues of trade, regional integration, agriculture and raw materials will be high on the agenda. In addressing education, health, women- and youth empowerment and development of human capital, the Commissioners will look at ways to cooperate more closely on the structural challenges in helping economies to prosper.