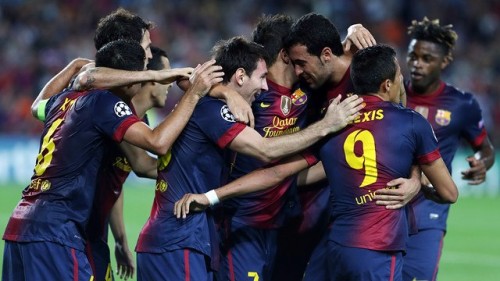 Barcelona has offered to play a soccer match for peace against a joint Israeli-Palestinian team at the end of July in the hope of promoting Middle East peace, Sandro Rosell, the club’s president said on Thursday.

The announcement was made in a joint statement with Israeli president Shimon Peres during Rossell’s first visit to Israel and the West Bank.

Rosell says the launched the initiative “in the hope that it can serve to build bridges of dialogue between the two communities that can help lead to reconciliation between the two,” Rosell said.

The venue has not been decided, but the most probable choice will be Tel Aviv, which has the biggest capacity stadiums, accoridng to Israeli media reports.

After landing in Tel Aviv on Thursday, after a direct flight from Milan, the Barcelona directors headed for the Kfar Ha Maccabiah complex for a private interview with the Israeli president, Shimon Peres.

After speaking to the media, the Barcelona representatives visited the Isaac Rabin Memorial, in the square that is named after the Israeli politician that was assassinated in 1995 after giving a speech in favor of peace.

Rosell is due to meet Palestinian president Mahmoud Abbas and head of Palestinian Football Association Jibril Rajoub in Ramallah on Friday to promote the initiative.

Last year FC Barcelona outraged Palestinians for extending an invitation to Gilad Shalit, the Israeli occupation soldier who was held as a prisoner of war in Gaza for five years, to attend a football match against Real Madrid at Barcelona’s home stadium Camp Nou on 7 October.

According to the Spanish daily El Pais, the invitation to Shalit, who was freed a year ago in a prisoner exchange Israel negotiated with Hamas, had been solicited by an Israeli “ex-minister.”

“This invitation does not indicate in any way that [the club] Barca takes a position in the Israeli-Palestinian conflict,” a club source told AFP.

Amid Palestinian anger, an invitation was also extended to a Palestinian Mahmoud al-Sarsak, who had recently been released having spent three years in an Israeli jail without charge  but he chose not to attend.