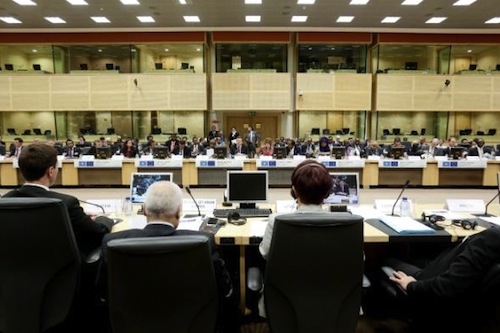 A joint article titled ‘Call for the immediate protection of civilians and medical personnel, facilities and transport in Syria’ signed by 25 Foreign Ministers was published in international media:

- immediately uphold their obligation to protect civilians as well as medical personnel, facilities and transport;

- allow and facilitate immediate and unimpeded humanitarian access to the whole of the territory;

Imagine that the city you live in, the place where you work and where your children go to school are all being destroyed. Not quickly from one day to another, but in a slow, gradual and unpredictable manner. Imagine the uncertainty and stress you would feel at the thought of tomorrow. Will the next house destroyed be my neighbour’s? Will it be mine? This is the tragic and unbearable reality for people living in Syria.

We want people around the world to understand that the on-going conflict in Syria has real and tangible consequences for ordinary people. So even though much of the discussion and coverage of the crisis tends to focus on the political and military situation, we must not lose sight of the day-to-day impact on people living in Syria.

The tragic conflict in Syria has continued for more than two years. Thousands of civilians have been killed every month and those who survive – whether in Syria or in its neighboring countries – suffer unprecedented humanitarian hardship.

We are shocked by the growing tragic consequences of the conflict. Fighting and violence have reached intolerable levels, leading to unbearable suffering, loss of human life, refugees-flows, massive displacement of people and material destruction. Despite the efforts to increase protection for all affected civilians in Syria and in neighbouring countries, the humanitarian situation continues to deteriorate dramatically and many civilians remain cut off from humanitarian assistance. We are particularly concerned about the most vulnerable, especially children and women.

The numbers speak for themselves. More than 100.000 people are estimated to have been killed during the war and 465.000 injured. More than 2 million refugees including 1 million of children have already left Syria, while 4.3 million including 2 millions of children have been forced from their homes, but remain within the Syrian borders. These numbers continue to increase daily.

We are appalled by the use of chemical weapons in Syria, which have taken so many civilian lives, including numerous women and children. We condemn in the strongest terms the use of such weapons of mass destruction. The use of chemical weapons by anyone under any circumstances is a grave violation of international law and an outrageous war crime. There should be no impunity for such acts and any perpetrators must be brought to justice.

All parties to the conflict have the responsibility to comply with the rules of international humanitarian law, including the principles of distinction, proportionality and humanity to protect civilians against the violence of conflict at all times. We have a moral obligation to remind and influence all parties to respect their obligations and to protect the provision of medical and humanitarian assistance in Syria.

In particular, we are greatly concerned that medical infrastructure has been severely damaged or destroyed. According to the UN, 60% of the public hospitals have been affected, many badly damaged and almost 40% completely unusable. Almost 80% of ambulances in the country have been damaged and, alarmingly, some are being misused for combat purposes. Convoys are regularly checked and medical supplies are often being seized. Patients, medical personnel, facilities and vehicles are being deliberately targeted by those involved in the hostilities. Medical facilities, including hospitals, are being exploited for combat purposes, and some are even being used as torture and detention centres.

As a result of the damage to health facilities, lack of qualified health personnel and insecurity, many people cannot consistently access medical care. This deprives them of basic medical services placing in particular women and children at significant risk, as well as those who suffer from chronic diseases, such as diabetes, hypertension, and heart disease. The disruption of vaccination programmes, damage to water and sanitation services, and destruction of homes and shelters also places people at substantial risk of infectious diseases. Outbreak of measles and diarrhea have already been documented.

In some instances, life-saving surgical supplies have been removed from aid convoys. We are also seeing too many civilians dying of injuries, which they could have survived, if only timely medical assistance was available. At the same time, humanitarian organizations continue to face dire conditions as they attempt to access victims.

Violence against civilians in Syria must stop now. Expansion of current humanitarian efforts is urgently required, independent of political efforts to resolve the conflict.

We express our gratitude to the humanitarian workers from various UN, international and domestic organisations, who put their lives at risk on the ground every day to deliver humanitarian supplies to all the civilians under extraordinary difficult circumstances. We wish to praise the courage and solidarity of ordinary men and women in their efforts to relieve the suffering of their families and neighbours in such a dire and tragic situation.

We call upon all parties to the conflict to immediately uphold their obligation to protect civilians as well as medical personnel, facilities and transport. They must allow and facilitate immediate and unimpeded humanitarian access to the whole of the territory, including delivery of medical care and humanitarian assistance on a non-discriminatory basis. We urge all parties to guarantee the safety and security of humanitarian personnel in the exercise of their duties.”