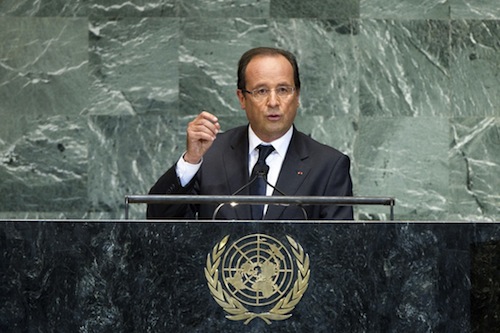 In his first appearance before the United Nations as President of France, François Hollande called on the world body to immediately give the Syrian people all the support they ask for in their fight against President Bashar al-Assad.

Citing Syria as a matter of immediate urgency, he put the number of dead there at nearly 30,000 since the uprising against the rule of the Assad family began 18 months ago. According to UN humanitarian agencies, more than 260,000 Syrians have fled to neighbouring countries and an estimated 2.5 million are in urgent need of humanitarian assistance.

In a review of world flashpoints, the French leader accused Iran of developing a nuclear programme without any final civilian purpose, warning that France will not accept such a diversion that threatens regional security. France, together with its European partners, is prepared to impose new sanctions, he said.

Iran’s nuclear activities have been of international concern since the discovery, in 2003, that Iran had concealed its nuclear activities for 18 years, in breach of its obligations under the Nuclear Non-Proliferation Treaty. Iran has repeatedly stated that its nuclear programme is for the peaceful purpose of providing energy, but many countries contend it is seeking to develop nuclear weapons.

Turning to the Middle East, President Hollande stressed the need to resume negotiations in mutual trust leading to the establishment of two states, Israel and Palestine, describing it as “the only just and lasting solution.”

He also called on the international community to face up to the gravity of the situation in the Sahel region of west Africa, where terrorist groups have seized northern Mali, stressing that France will support the African Union and the Economic Community of West Africa in the measures they take to restore Mali’s territorial integrity.

Turning to development issues, the French President warned that the UN Millennium Development Goals (MDG) – which seek to slash a host of social ills, including extreme hunger and poverty, infant and maternal mortality, and lack of access to education and medical care, all by 2015 – will not be attained without additional resources. He called for innovative financing in light of the budgetary constraints afflicting many states.

He also urged the adoption of a financial transaction tax on the movement of capital to fund programs for development and the eradication of diseases such as HIV/AIDS and malaria, and called for the enlargement of the 15-member Security Council, including a permanent seat for Africa, to better reflect the current status of the world.