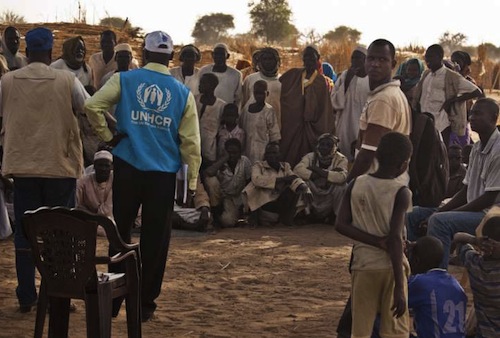 Some 50,000 refugees from south-western Darfur have arrived in Chad following fresh tribal clashes, the United Nations refugee agency said, urging more shelter, clean drinking water, food and medicine in what is called the largest influx of refugees from Sudan into Chad since 2005.

“Our staff tell us that most of the people fleeing Sudan have arrived on foot, donkeys or on carts to save their lives,” UN Refugee Agency (UNHCR) spokesperson, Melissa Fleming, told journalists in Geneva.

“Refugees witnessed their houses being destroyed and villages completely burnt down. Many reported their relatives being killed in the latest round of violence,” Fleming noted, adding that people are “exhausted, traumatized and visibly disturbed.”

The number of refugees is expected to increase, Fleming said with more clashes, “Our staff report witnessing thick heavy smoke in the Darfur skies fearing this may be the result of more houses being set on fire in the nearby Darfur villages.”

The groups, the majority of the latest arrivals being women and children, are fleeing fresh tribal clashes in the Sudanese town of Um Dukhun, according to UNHCR. In last two months, clashes have now displaced over 74,000 people into Chad including Sudanese and Chadians – who lived as refugees in the conflict zone.

The first waves of civilians who fled Darfur arrived in March earlier this year to seek safety in the neighbouring town of Tissi in Chad. Among some 24,000 people, records show that 8,000 are Sudanese and 16,000 Chadians.

“They have no water, no food and are sleeping under trees,” Fleming said about Tissi where new refugees arrive daily.

“Among them are people wounded by bullets that are abandoned to their fate and are sleeping on the ground. There is no health centre, or operational clinic with surgical materials in this area,” she added.

The location is some 231 kilometres away from UNHCR’s nearest field office in Koukou Angaranana, which she said was “an eight hours drive with bad road conditions”.

UNHCR said it has deployed teams on the Chad-Sudan border to register and assist the arriving refugees, and to provide basic items, such as blankets.

“Our teams since last Wednesday are busy registering the new arrivals before relocating them to the Goz Amir Camp, in Dar Sila region of Chad,” Fleming said, noting that the camp is nearing capacity.

“UNHCR is working with the Chadian authorities and partners to develop a new refugee camp to accommodate the latest arrivals,” she added.

The UN agency is working with other partners, including the Canadian non-governmental organization ADESK to help evacuate those seriously wounded, and to provide for the immediate needs, which remain shelter, clean drinking water, food and medicine.