G8 wants Greece to remain in the Eurozone 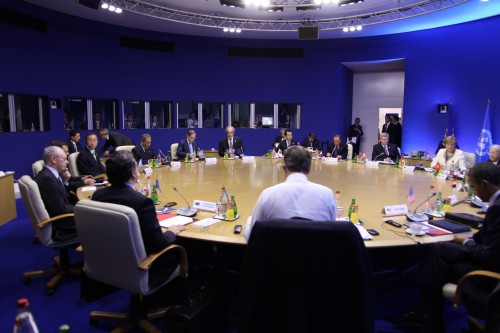 The debt crisis in Europe and its impact on international and European economy overshadowed every other issue at the G8 summit at Camp David, with leaders saying that something should be done to resolve the euro crisis but want Greece to stay in the Eurozone.

G8 leaders said it is “their imperative” to promote growth and jobs to reinvigorate the global economy, and gave their backing to Greece remaining in the eurozone, according to Reuters.

“We agree on the importance of a strong and cohesive Eurozone for global stability and recovery, and we affirm our interest in Greece remaining in the eurozone while respecting its commitments,” the leaders said in the communique issued after the meeting at Camp David on Saturday.

“Against this backdrop, we commit to take all necessary steps to strengthen and reinvigorate our economies and combat financial stresses, recognising that the right measures are not the same for each of us,” said the communique.

Earlier, Obama opened the morning session, saying that a lot of time must be spent on economic issues promising to seek ways to re-establish healthy growth and jobs and address concerns in Europe.

Obama has said the G8 was committed to growth, stability and fiscal consolidation, as leaders tried to bridge divisions on how to deal with the deepening eurozone crisis, Reuters reported.

Obama indicated a balanced approach was needed as “part of an overall package that all of us have to pursue in order to achieve the kind of prosperity for our citizens that we’re looking for”.

After the meeting at Camp David, leaders will gather for the two-day NATO summit meeting in Chicago, where issues such as Afghanistan will be discussed.