Gaza marathon cancelled due to local ban on women’s participation 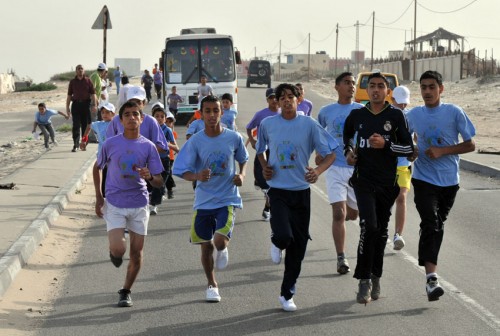 The annual United Nations-organized Gaza marathon will not take place this year due to disagreements with local officials on the participation of women, the UN agency assisting Palestinian refugees said today.

In a press release announcing the decision, the UN Relief and Works Agency for Palestinian Refugees in the Near East (UNRWA) stated that it “regrets” the cancellation of the third edition of the race, originally scheduled for 10 April.

“This disappointing decision follows discussions with the authorities in Gaza who have insisted that no women should participate,” UNRWA stated.

In the previous two marathons, professional and amateur athletes from the Middle East and around the world raced along the 42-kilometre long Gaza Strip in order to raise funds for the UNRWA 2012 Summer Games.

Organized by UNRWA, the Games allow some 250,000 Gaza children “to have fun and express themselves freely and safely, an experience that is rare for children growing up in the territory under an Israeli blockade,” according to the Agency.

UNRWA nevertheless encouraged registered participants to travel to Gaza and attend an alternative programme of events which it said it was still working on and would make public shortly.