General Mood: ‘no volume of observers’ in Syria can end the violence 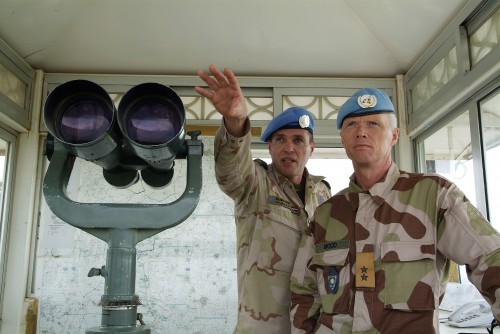 Head of UN observers froce in Syria, General Mood, noted that violence persists in Syria as UNSMIS deploys, and “no volume of observers can achieve a progressive drop and a permanent end to the violence in Syria,” speaking to journalists in Damascus.

“I am more convinced than ever that no amount of violence can resolve this crisis durably. The Mission plans to help bring talks between parties on the ground on urgently needed stability,” he added.

The UNSMIS chief said that the Mission is on its way to full deployment, with some 260 military observers on the ground, hailing from 60 UN Member States, and that he expected the Mission to be fully operational soon, in “record time.”

In relation to the possible involvement of third parties, such as the terrorist group Al-Qaida, in the violence in Syria, the UNSMIS chief noted that there had been some “very worrying incidents”, such as deadly bomb attacks in Damascus on 10 May, which reportedly killed or wounded dozens.

“This is the kind of violence that is obviously impossible at this stage to decide where it came from, by whom,” he said. “I am concerned about incidents where explosive improvised devices are targeting innocent civilians, innocent people, because it is not going to help the situation. I have seen the reports that you refer to, if they are correct it is a worrying development.”

Speaking in Geneva, the spokesperson for Joint Special Envoy Annan, Ahmad Fawzi, told reporters that Mr. Annan has mentioned the involvement of a “third element” in the violence, which has led to further concerns.

“And when we speak about ‘third actors’ on the ground, we mean there are the hallmarks of activities and incidents and explosions that appear to come from sources other than opposition or Government sources. This has yet to be verified.”

Ban Ki-moon, the UN secretary-general, on Thursday said he believed last week’s deadly bombings in Damascus were the work of al-Qaeda, said the UN was still investigating who was responsible for the attacks which killed at least 50 people and injured hundreds.

On Friday Ban called again for all parties in the country to abide by a six-point peace plan proposed by UN-Arab League envoy Kofi Annan and said the UN was accelerating its deployment of its monitoring mission, according to Al Jazeera.

The crisis in Syria, which began in March 2011, has claimed over 9,000 lives, mostly civilians, and displaced tens of thousands.