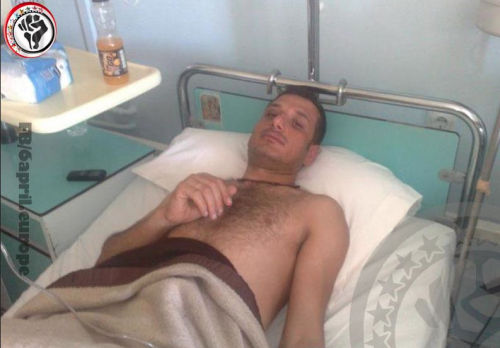 Eight supporters of Golden dawn (Chrysi Avgi) party have attacked 4 Egyptians in Athens in the urban area of Kallithea on Thursday, the Egyptian 6th of April movement in Greece reported on its offical facebook page.

The supporters of the  Neo-Nazi party, who wore black clothes, attacked the Egyptians with batons and chains while 3 of the 4 Egyptians were seriously injured.

The 6th of April movement in Greece, has from its part, warned the Egyptian Arab community about the anti-immigrant party. In a press release issued by the movement they demanded that Egyptians ” avoid staying out alone late at night or talking on cell phones in Arabic aloud while walking at night and avoid areas like Omonia, Akharnon, Kallithea where many of the immigrants live and many of the attacks have by the racist party have taken place.”

Meanwhile, the President of the Muslim Association of Greece Naim El Ghandour condemned the “clearly racist”  attacks noting the recent escalation of racism and discrimination against all immigrants in Greece “which never existed before”.

Golden Dawn, the extreme-right party, who seeks to dpeort illegal immigrantss, managed to enter the parliament after the 6th of May elections in Greece. Even though, according to all the opinion polls before the elections this was anticipated, they managed to gain an surprisingly almost 7% (6.97%) of the vote, while in the previous elections in 2009 they had received only 0.29% of the vote.