Posted on: May 9th, 2012 by AlYunaniya Staff No Comments 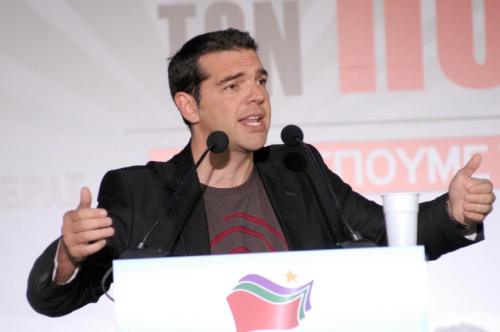 The leader of Coalition of the Radical Left (SYRIZA) Alexis Tsipras, who was handed a mandate on Tuesday to form a coalition government, is due to meet the leaders PASOK and New Democracy on Wednesday, but  chances to reach an agreement, seem unlikely with Greece heading towards re-elections, Kathimerini reported.

SYRIZA leader who was handed the mandate by Karolos Papoulias on tuesday has three days to form a government, vowed to rip up the nation’s bailout agreement with its debtors and cancel all austerity measures. This  prompted a strong reaction from PASOK and New Democracy, which made it clear that there could be no consencus reached. The SYRIZA president asked Mr. Venizelos and Samaras to send letters to the EU and the IMF whereby they will withdraw their memorandum commitments, Ta Nea reported.

In his upcoming talks to explore whether he will be able to form a  coalition with parties of the left and parties representing , the 38 year old head of SYRIZA laid out the five points that will be the focus of discussions including:

-immediate abolition of a law granting MPs immunity from prosecution, reform of the electoral law and a general reform of the political system.

-Investigation the banking system. He asked for BlackRock’s report to be publicized

SYRIZA won an unprecedented 16.78 percent of the vote on Sunday but would still need the support of either ND or PASOK to form a majority government. It has the option of forming an administration with just 120 MPs rather than 151 but the government would need to pass a vote of confidence, according to Katihmerni.

Prospects show that Tsipras will be unable to reach any agreement by Thursday, leading to PASOK taking over the mandate to form a government. After that, Papoulias will call in the party leaders to try to reach a deal. If that fails, new elections will be called.