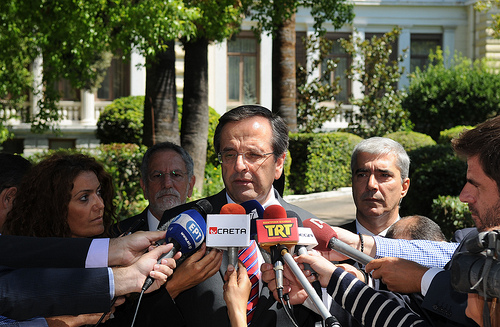 Prime Minister Antonis Samaras and his coalition partners are to meet again this week in an effort to finalize the tough austerity package ahead of troika’s scheduled return to Athens on Friday. According to Kathimerini, the talks are unlikely to take place before Wednesday with Finance Minister Yannis Stournaras scheduled to visit Berlin first to present an outline of the package to his German counterpart Wolfgang Schaueble.

Consultations with the troika will continue during the week, while on Friday European Council president Herman Rompuy travels to Athens. The package of measures will be ready for presentation in the informal Cyprus Eurogroup by the end of next week. Samaras will meet with ECB president Mario Draghi and probably with IMF head Christine Lagarde within the month, protothema.gr writes.

The new austerity package will be finalised “no later than early next week”, government spokesman Simos Kedikoglou said yesterday in a radio interview. He claimed that the government was trying to “find the fairest possible solution at a very difficult time for decisions that no one would like to take but which were necessary and the last” that the country will have to take. Kedikoglou also said that the austerity package would be accompanied by growth policies.

Meanwhile, the Premier will make a stop in Thessaloniki on Saturday, since for the first time it has been decided not to follow the established practice of a speech and a press conference. Officially, the communications staff speaks of a different ethos and behavior by Samaras’ government, one consistent with the times. In another approach, the prime minister wants to avoid a speech where the only thing he would have to announce would be painful cuts, and especially a press conference where he would be faced with his quite recent commitments, from renegotiation to changing the mix of economic policy and asking for an inquiry committee.

In the meantime, employees of the police and other security forces and judicial employees are planning action this week to protest against cuts in their payrolls. Tax office employees have also threatened to strike over the planned cuts, media report.