Posted on: September 11th, 2012 by AlYunaniya Staff No Comments

Greek PM in ‘tough and sticky’ talks with troika 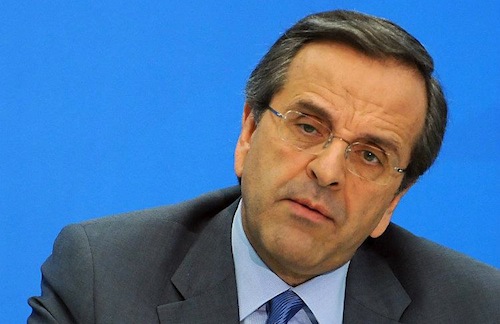 Prime Minister Antonis Samaras attempted yesterday to bridge differences with the troika head representatives over the new austerity package, after the EC-ECB-IMF team rejected parts of the plan during their meeting with FinMin Yannis Stournaras Sunday.

A source told Reuters the troika felt a string of proposed measures worth about 2 billion euros, such as cutting public sector operating expenses, were too vague.

Sources told ANA, Samaras’ meeting with troika inspectors yesterday was “tough and sticky”. Finance minister Yannis Stournaras was present. He said afterwards that efforts were being made to convince the troika of the legitimacy of the government’s position.

It is understood that the details concerning the measures were not discussed. Rather, the talks focused on what is feasible and what is not feasible, with the government telling the troika that it cannot add any more austerity measures to the list it has already prepared. Sources said that the government must present a completed draft with 11.9bn euros in measures for 2012-2013 by next Friday’s Eurogroup meeting in Nicosia, Cyprus, even if there is no prior agreement with the troika and of if the measures have not been unveiled to the public.

Sources confirmed that the troika were insisting on dismissals from the civil service, including the core public sector, which the government refuses, as affirmed after Sunday night’s meeting of the leaders of the three parties participating in the coalition government, ANA writes.

Coalition leaders need to agree on the new austerity package, which will include mainly cuts in salaries and pensions and public spending, and should be ready by the end of the week to be presented at the informal Cyprus Eurogroup.

Yesterday, PASOK leader Evangelos Venizelos met with the troika heads. After the meeting, Venizelos’ associates expressed their anxiety about the measures to be announced, namely those of EUR 2 billion rejected by the Troika. They stressed that if the measures proposed by Finance minister Yannis Stournaras are not accepted, salaries, pensions and allowances will be immediately affected, protothema.gr writes. The two “red lines” for PASOK are allowances for the disabled and horizontal cuts. They are still looking for counter measures, which in many respects coincide with those of the Democratic Left. PASOK reiterates that the discussion with the lenders had to begin from the extension of the fiscal programme and debt reduction.

Democratic Left leader Fotis Kouvelis rejected 5 points in the package of measures: elimination of bonuses; elimination of seasonal bonuses; reduction of tax exemptions for special tax groups; increase of fares in public transport and elimination of university publications. He also analyzed in detail his own proposals for equivalent measures.