Posted on: June 12th, 2013 by Dimitris Ioannou No Comments 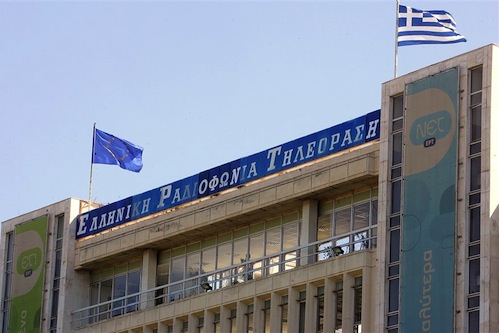 Screens went blank in many parts of the country shortly before 11 pm. In Corinth, for example, the broadcasts ceased at 10.50 pm, just after presenters in studio said that riot police could be seen approaching transmitters, enet.gr writes.

The government has circulated a non-paper, calling the move a decision of high symbolism as regards the streamlining of the Greek public sector.

Kedikoglou said that ERT would be replaced by a modern, public but not state-owned broadcasting body. All ERT’s staff will receive the normal redundancy compensation and that the new body will operate with less staff.

During the intervening period between its closure and the launch of the new organisation, the public will not have to pay fees for ERT, he added.

According to tovima.gr, the rumored restructuring of public broadcasting service ERT is causing tension amongst the three government partners. PASOK and DIMAR object ERT shutting down; government claims that both coalition leaders were informed well ahead about the decision.

The two government partners have revealed that the government is considering shutting down ERT and setting up a new public broadcasting service a few weeks later, with reduced staff and 50% less public funding.

The closure was one of the most drastic measures yet to pare down Greek public institutions as part of austerity measures imposed on the country as a condition of its bailout, Reuters writes.