Haiti: fight against cholera continues, but claims against UN ‘not receivable’ 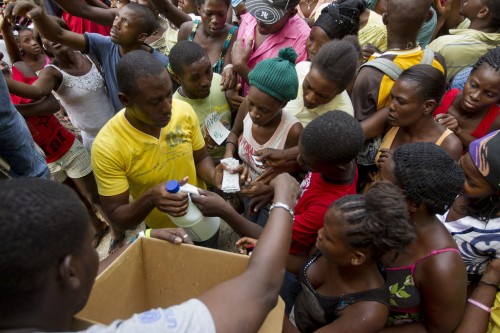 The United Nations has ramped up its efforts to eliminate cholera in Haiti. At the same time, claims against the Organization on that matter are “not receivable,” a spokesperson for Secretary-General Ban Ki-moon said today, after officials in the Caribbean nation were informed of the decision.

In November 2011, a claim for compensation was brought against the UN on behalf of victims of the cholera outbreak in Haiti.

“Today, the United Nations advised the claimants’ representatives that the claims are not receivable pursuant to Section 29 of the Convention on the Privileges and Immunities of the United Nations,” spokesperson Martin Nesirky told reporters in New York.

Mr. Ban, in a telephone call to Haitian President Michel Martelly, informed him of the decision and reiterated the UN’s commitment to eliminating the disease in Haiti, Mr. Nesirky added.

“Since the outbreak began in 2010, the United Nations and its partners have worked closely with the people and Government of Haiti to provide treatment, improve water and sanitation facilities and strengthen prevention and early warning,” he noted.

In December 2012, Mr. Ban launched an initiative for the elimination of cholera in Haiti, which aims to strengthen Haiti’s own National Cholera Elimination Plan through significant investments and the use of an oral cholera vaccine.

Following the launch of the initiative, the Secretary-General appointed renowned United States physician Paul Farmer to help galvanize support to eliminate cholera in Haiti, where the disease had already claimed over 7,750 lives by the end of 2012.

The initiative will invest in prevention, treatment, and education, and focus on the extension of clean drinking water and sanitation systems as well as the use of an oral vaccine to combat cholera, an acute intestinal infection caused by consuming contaminated food or water.

“The Secretary-General again expresses his profound sympathy for the terrible suffering caused by the cholera epidemic, and calls on all partners in Haiti and the international community to work together to ensure better health and a better future for the people of Haiti,” Mr. Nesirky said.