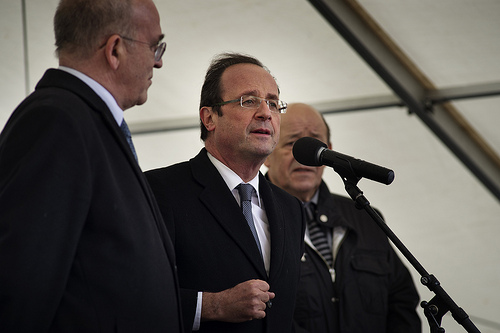 French presidential frontrunner Francois Hollande vowed to help Greece if elected, he said on Wednesday in a press conference.

Mr. Hollande said that he wants to lighten the burden on Greeks, pointing out that Greece should “regain a level of development”, Protothema writes.

At the same time, he said that if elected next month he would set forth his ideas for improving economic growth in Europe in a letter to European Union leaders the next day.

Hollande, calls to renegotiate an EU fiscal in order to include methods to boost growth if he beats conservative  Nicolas Sarkozy in a May 6 election runoff as polls predict.

His letter would include four points: The creation of eurobonds to finance investment and industry projects, freeing up investment funds, a financial transaction tax and deploying unused structural investment funds for various prgrams.

Some of these measures will be hard to negotiate on a European level, but Hollande stated them as the debate in Europe began to shift away from the tight deficit-cutting rules imposed by the Sarkozy-Merkel alliance, AFP reports.

Hollande won 28.6 percent of the vote in the first round to Sarkozy’s 27.18 percent, and is forecast in opinion polls to beat the incumbent president on May 6.