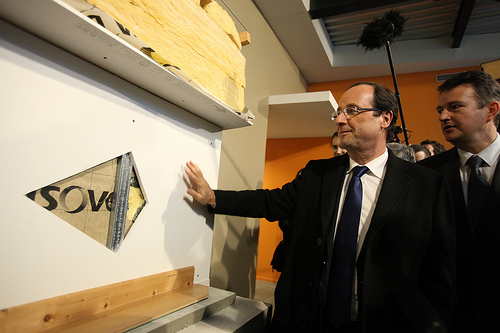 French President Francois Hollande arrived in Kabul on Friday in a surprise visit to meet French soldiers he has pledged to pull out of the torn apart by war Afghanistan by the end of the year.

It is Hollande’s first visit to Afghanistan since assuming office on May 15. He was accompanied by French defence and foreign ministers, Jean-Yves Le Drian and Laurent Fabius, and chief of army staff Admiral Edouard Guillaud, according to AFP.

The visit The French head of state arrived at Kabul airport at around 8:30 am (0400 GMT) at the start of a visit expected to last only a few hours.

The new French President, Francois Hollande, has promised to pull out the country’s forces by the end of this year,  two years before the alliance’s timetable. But  in Chicago NATO summit Secretary-General Anders Fogh Rasmussen expressed confidence the alliance would “maintain solidarity” despite France’s decision. ”There will be no rush for the exits,” he said.

There are currently 3,400 French soldiers in Afghanistan.

Hollande it clear at the NATO summit to Obama that he would not renege on a campaign pledge to send back French combat troops a year earlier than planned.

Hollande is in Afghanistan to tell to French soldiers why he had decided to accelerate their exit from the nearly 11-year war, accoridng to Khaleejtimes. Other NATO allies agreed in Chicago to an unconditional withdrawal by the end of 2014, leaving Afghans responsible for national security.