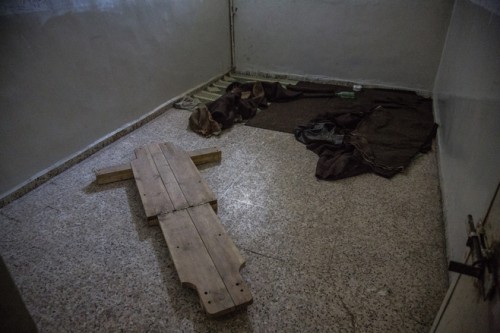 Government security branches in Raqqa city hold documents and potential physical evidence indicating that detainees were arbitrarily detained and tortured there while the city was under government control, according to Human Rights Watch (HRW).

Local opposition leaders with the support of the National Coalition for Syrian Revolutionary and Opposition Forces and neutral international experts should safeguard potential evidence of torture and arbitrary detention in security forces centers in opposition-controlled areas, Human Rights Watch said.

“The documents, prison cells, interrogation rooms, and torture devices we saw in the government’s security facilities are consistent with the torture former detainees have described to us since the beginning of the uprising in Syria,” said Nadim Houry, deputy Middle East director at Human Rights Watch.

“Those in control of Raqqa need to safeguard the materials in these facilities so the truth can be told and those responsible held accountable.”

In the State Security facility, Human Rights Watch researchers observed on the ground floor and in the basement, rooms that appeared to be detention cells.

Among the documents were what appeared to be lists of security force members who had worked there. Human Rights Watch researchers also saw a “bsat al-reeh” torture device in the facility, which former detainees have said has been used to immobilize and severely stretch or bend limbs.

Several former detainees held at other intelligence facilities in Syria have described to Human Rights Watch how security guards used “bsat al-reeh” torture devices in detention facilities across the country. They tie a detainee down to a flat board, sometimes in the shape of a cross, so that he is helpless to defend himself. In some cases, former detainees said guards stretched or pulled their limbs or folded the board in half so that their face touched their legs, causing pain and further immobilizing them.

Among the reams of documents and case files Human Rights Watch researchers saw in the Military Intelligence facility in Raqqa were some that appeared to list all of Raqqa’s college graduates, suggesting that they were of interest to the security branch by virtue of their college education.

Researchers also observed three solitary confinement cells and one group detention cell in the right half of the first floor of the facility.

Human Rights Watch researchers interviewed five people formerly held by Military Intelligence in Raqqa, who said that security forces detained and interrogated them there. They said that the security services questioned them about lawful activities, such as participating in peaceful demonstrations, providing relief assistance to displaced families, defending detainees, and providing emergency assistance to injured demonstrators. They believed that they were detained for these lawful activities, making their detention arbitrary.

Human Rights Watch has repeatedly urged the UN Security Council to refer the situation in Syria to the International Criminal Court (ICC).

“Learning the truth about the role intelligence services have played in spying on and terrorizing Syrians will enable them to guard against these abuses in the future,” Houry said.

“But for Syrians to learn the truth once the conflict ends, it is vital even under the tough conditions of war to preserve the potential evidence of the security forces’ role.”