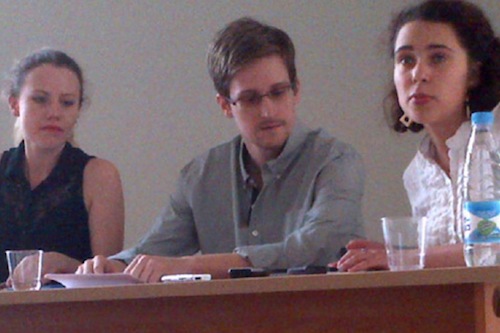 Tanya Lokshina writes: “When I received an email late Thursday from one “Edward Snowden” I was naturally skeptical. The invitation, supposedly from one of the world’s most sought-after people, had a whiff of Cold War-era spy thriller to it. The note instructed me to go to the arrivals hall of Sheremetyevo Airport, where “someone from airport staff will be waiting there to receive you with a sign labeled ‘G9.’” What would you think?

Even as the media calls started flooding in, I was still thinking it might all be a hoax. While I juggled spooning mashed carrots into the mouth of my wailing child and talking to the BBC – journalists and babies are equally needy – I was still half thinking this wasn’t going to happen.

And then the phone rang.

It was airport security giving me further details and asking for my passport number. That was the moment it hit me: this was real, the world’s most wanted man wanted to meet me.

My phone was ringing nonstop and at some point I thought I’d miss the meeting altogether – the media calls were coming in so furiously it wasn’t allowing me time to get dressed and leave. But finally I managed to get my act together and made it to the airport express train just in time. While en route I received another phone call, but from a very different source: the United States embassy. Did I understand the position of the US? That Snowden was not a human rights defender but a law breaker who had to be held accountable? I said in response that the official position of Human Rights Watch on the case was in our statement published several weeks back. The US official said that the embassy was familiar with the statement but they also wanted me to convey the official US position to Snowden. I was surprised at the request but in the end decided to mention this to Snowden. It seemed only fair to let him know about this call.

The scene at the airport was like nothing I have ever experienced. I am used to crowds, and I am used to journalists, but what I saw before me was madness: a tangle of shouting people, microphone assaults and countless cameras, national and international media alike. I feared I might be torn apart in the frenzy.

I pushed through to the staff entrance in Terminal F, and there was the man with the sign, “G9.” Just like they said. So, along with eight other people – including the Russian ombudsman, an MP, and representatives of other rights groups – I was put on a bus and driven to another entrance. We walked in and there he was: Mr. Snowden waiting for us along with someone from Wikileaks and a translator.

The first thing I thought was how young he looks – like a school kid.

I managed to snap two pictures and send them to colleagues at Human Rights Watch to be posted on Twitter before we were told no photos.

The meeting lasted one hour. He read the statement and then said he was ready to answer questions. He said he wanted us to petition the US and European states not to interfere with his movements. Under the circumstances, he said, he had no other options but to file a claim for asylum in Russia. He said his living conditions were nothing to complain about and he was in good health – but that he couldn’t stay at the Moscow airport indefinitely. And it seemed that the only way to have his security guaranteed in Russia was to ask for asylum. Hence, the second request: please ask the Kremlin to support his asylum claim. Though he wants to move on to Latin America, he emphasized repeatedly, and said that Russia was a temporary move.

Then we left the same way we came in, along corridors and once again through the incredible media circus. It’s midnight in Moscow now – and I still haven’t had my breakfast.”