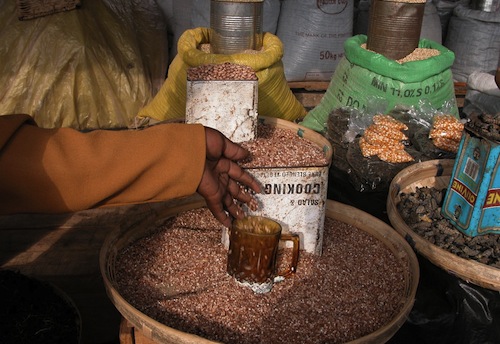 The United Nations today reported a drop in global food prices for the third consecutive month due to continued economic uncertainty and generally adequate prospects for food supplies.

The Food and Agriculture Organization’s (FAO) Food Price Index fell four points in June, bringing it to its lowest level since September 2010, with the largest fall registered in the prices for oils and fats, FAO said in a news release.

The index measures the monthly change in international prices of a basket of 55 food commodities, including meat, dairy, sugar, and cereals.

FAO reported that in spite of the fall, growing concerns over dry weather sent prices for some crops higher toward the end of the month, which may signal a rebound of the Index in July.

The agency lowered its forecast for 2012 world cereal production by more than 23 million tonnes from May, which it said is likely to result in a smaller build-up of global stocks by the end of seasons in 2013.

FAO’s new forecast for world cereal production this year stands at 2,396 million tonnes, still a record level and two per cent up from the last year’s amount.

Even though the overall cereal supply remains adequate due to abundant quantities of rice, FAO noted that grain prices remain very volatile due to “continuing dryness and above-average temperatures in most of the major maize growing regions of the United States.”

The agency will also hold an event tomorrow, at its headquarters in Rome, to discuss volatility in food prices and price speculation.

“FAO has been actively involved in studying food price volatility and identifying appropriate policy responses,” said FAO Director-General José Graziano da Silva. “Our analytical work is helping to deepen the understanding of the nature, causes and impacts of volatility and of what governments and other stakeholders can do about it.”