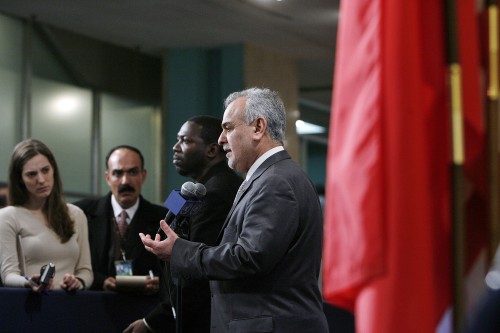 An Iraqi court sentenced the country’s fugitive Sunni vice president, Tariq al-Hashemi, and his son-in-law to death for the third time on the charges of masterminding a car bomb attack on Shiite pilgrims Karbala last December.

“The Central Criminal Court of Iraq (CCCI) issued verdict of penalties by hanging against Tariq al-Hashimi and his son-in-law Ahmed Qahtan after finding them guilty in the case of bombing a KIA minibus among Shiite pilgrims on the major Shiite ritual of Ashura last year,” the spokesman of the Iraqi Supreme Judicial Council (SJC) Abdul-Sattar al-Biraqdar told reporters, according to Xinhua.

The court passed the sentence in absentia on al-Hashemi who is currently in Turkey.

Al-Hashemi and his aide and son-in-law Ahmed Qahtan received last Thursday the second death sentence on charges of instigating the killing of an interior ministry official.

Last September they were sentenced to death for their involvement in the killing of an Iraqi army officer and a lawyer.

Iraq’s Shiite-led government has accused al-Hashemi of being involved in 150 bombings, assassinations and other attacks from 2005 to 2011 most of which were allegedly carried out by his bodyguards and other employees. Al-Hashemi has claimed that his bodyguards were likely tortured or otherwise coerced into testifying against him.

Interpol has also issued a “red notice” for al-Hashimi in May, “on suspicion of guiding and financing terrorist attacks in the country.” The notice calls on the 190 countries that belong to the international police organization to help locate and arrest him, at the request of the Iraqi authorities. No such action has been taken to arrest him since the notice was issued. Al-Hashimi is now living in Turkey. Before that, he lived in Iraq’s semi-autonomous Kurdistan region and also traveled to Saudi Arabia and Qatar at the invitation of those governments.