Posted on: July 19th, 2012 by AlYunaniya Staff No Comments 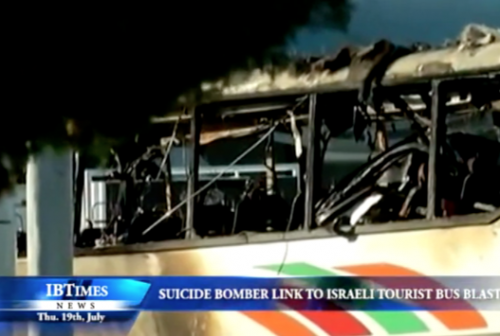 The tourists had arrived from Israel on a charter flight and were waiting in a bus in the car park at Burgas Airport, on the Black Sea, at the time the blast took place.

Just hours after the attack Israeli Prime Minister Benjamin Netanyahu said Iran was to blame for the attack and that “Israel will react powerfully against Iranian terror.”

A bombing on a bus with Israeli tourists in Bulgaria was likely carried out by a male suicide attacker, Bugaria’s interior minister said Thursday.

Earlier Thursday, it was reported that the death toll from the attack rose to six Israelis, after one of the wounded succumbed to his wounds in the hospital, the bus driver and the suicide bomber, according to Haaretz.

Video surveillance in front of the airport and the investigation showed the bomber could not be distinguished among arriving Israeli tourists. “He looked like everybody else – a normal person with Bermuda shorts and a backpack,” Interior Minister Tsvetan Tsvetanov said, according to Reuters.

About 34 wounded Israeli tourists will be flown back to Israel in the next hours, Haaretz reported.

The blast came on the 18th anniversary of a 1994 bomb attack on the headquarters of Argentina’s main Jewish organization by a Hezbollah suicide bomber, which killed 85 people, Reuters writes.

Israel and Western powers have accused Iran for developing a nuclear weapons and have not rules out military action against the Islamic Republic, while Tehran insists its nuclear program is for peaceful purposes.

Hezbollah is a powerful political party and militant group  in Lebanon backed by Iran and Syria. In 2006 it fought a war with Israel in 2006.