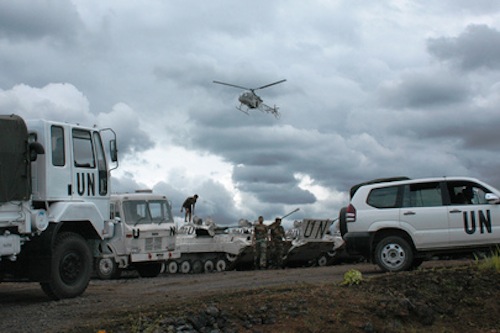 Secretary-General Ban Ki-moon stressed that African countries have a “historic opportunity” to end the conflict in the Democratic Republic of the Congo (DRC), and underlined that joint efforts will be critical to stabilize the region.

“A genuine and collaborative political effort must now take place at the regional level,” Ban said in his remarks at the 11+4 regional oversight meeting of the Peace, Security and Cooperation Framework for the DRC and the Region, which was held on the sidelines of the African Union Summit in Addis Ababa, Ethiopia.

“While the situation remains volatile, we have an historic opportunity to end the suffering and stabilize the region, which holds such a great potential for human development.”

Βan emphasized that while the signing of the UN-brokered Peace, Security and Cooperation Framework for the DRC and the Region was “a milestone” in efforts to launch a comprehensive peace process, countries now face a test of implementation that will be met “only if all the signatory countries work together to end the political impasse and generate momentum towards human security and economic development.”

The Framework, which was signed in February by 11 African leaders including Rwanda and Uganda, aims to end the cycles of conflict and crisis in the eastern DRC – where, in the most recent hostilities, rebels from the 23 March Movement (M23) have been clashing with the DRC national armed forces (FARDC) – and to build peace in the wider region.

Ban reiterated the support of the international community, including the four organizations that were witnesses to the signing of the Framework – the African Union, the International Conference on the Great Lakes Region, the Southern African Development Community and the UN.

In addition, Ban said that his Special Representative to the region, Mary Robinson, is working closely with all signatories and is spearheading the effort to define benchmarks on regional commitments.

Ban also commended DRC President Joseph Kabila’s commitment to implement significant reforms in the country, including the establishment of a national oversight mechanism.

On the margins of the Summit, The Secretary-General has been meeting with various African leaders.

In his meeting with the President of the Republic of the Congo, Denis Sassou Nguesso, Mr. Ban praised the Head of State for his efforts to address the situation in the Central African Republic (CAR), in his capacity as Mediator in the crisis there, and for hosting the first meeting of the International Contact Group on the CAR.