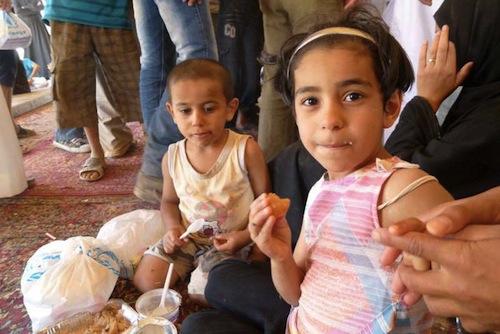 The Jordanian authorities must not deny entry to anyone fleeing the armed conflict in neighbouring Syria, Amnesty International said after families with young children were among scores of people forced to wait at the border in recent days.

“The Jordanian authorities must ensure safe access to Jordan for all those wishing to seek safety without discrimination,” said Said Boumedouha, Acting Director of Amnesty International’s Middle East and North Africa Programme.

“Persons fleeing Syria should not be denied entry even on a temporary basis as this puts their lives in danger. Jordan has an obligation under international law to ensure that its borders stay open to receive refugees.”

Since Wednesday 14 August, Syrian national Amina and her six children have been denied entry to Jordan at the official Nasib border crossing, the organization has learned. Jordanian border officials granted them entrance visas but told them that they could not enter Jordan for one month. Their passports were stamped with the message: “Return in one month”.

Other families were also reportedly turned away, both at Nasib and other border crossings.

Amina and her family are unable to return to their small hometown, Dera’a al-Hara, as it has been attacked and besieged by Syrian government forces. They have been stuck in no-man’s land between the Jordan and Syria border crossing points since 14 August.

“We have no water, no bread and are forced to sleep on the road with about one hundred other families,” Amina said.

The family is struggling to survive by eating what fruit it can find on nearby trees.

Amina told Amnesty International that their home had been hit by a rocket. Other residents from Dera’a al-Hara said that tens of bodies are lying in the town’s streets. Security forces have not allowed the few inhabitants who remained to bury them, they said.

The town is in the south-western governorate of Dera’a where mass protests against President Bashar al-Assad’s government began in March 2011 and were met with excessive and lethal force by the security forces.

For some months Jordan has not allowed certain categories of people to enter, including Palestinian and Iraqi refugees from Syria, people without identity documents or single men.

This new development of Syrians holding valid passports being turned away may indicate a further hardening of the Jordanian authorities’ position.

Recent moves by the Jordanian authorities to deny entry to Syrians with correct identity documents signals Jordan’s growing weariness to host half a million refugees from Syria, with no end to the crisis in sight.

The influx of refugees has placed a strain on Jordan’s infrastructure. It has created an increased demand for water, electricity, housing, schools and food. Some residential areas are struggling to accommodate particularly large refugee populations and frustration among many sectors of the population has grown, as rents and competition for jobs increase.

“Regardless of overstretched resources, the Jordanian authorities still have an obligation to ensure that all those fleeing have access to it’s territory and to safety ,” said Said Boumedouha.

“Crucially, the international community must ensure that Jordan and other hosting countries have the financial and technical support they need to provide adequate protection and assistance for the refugees from Syria.”